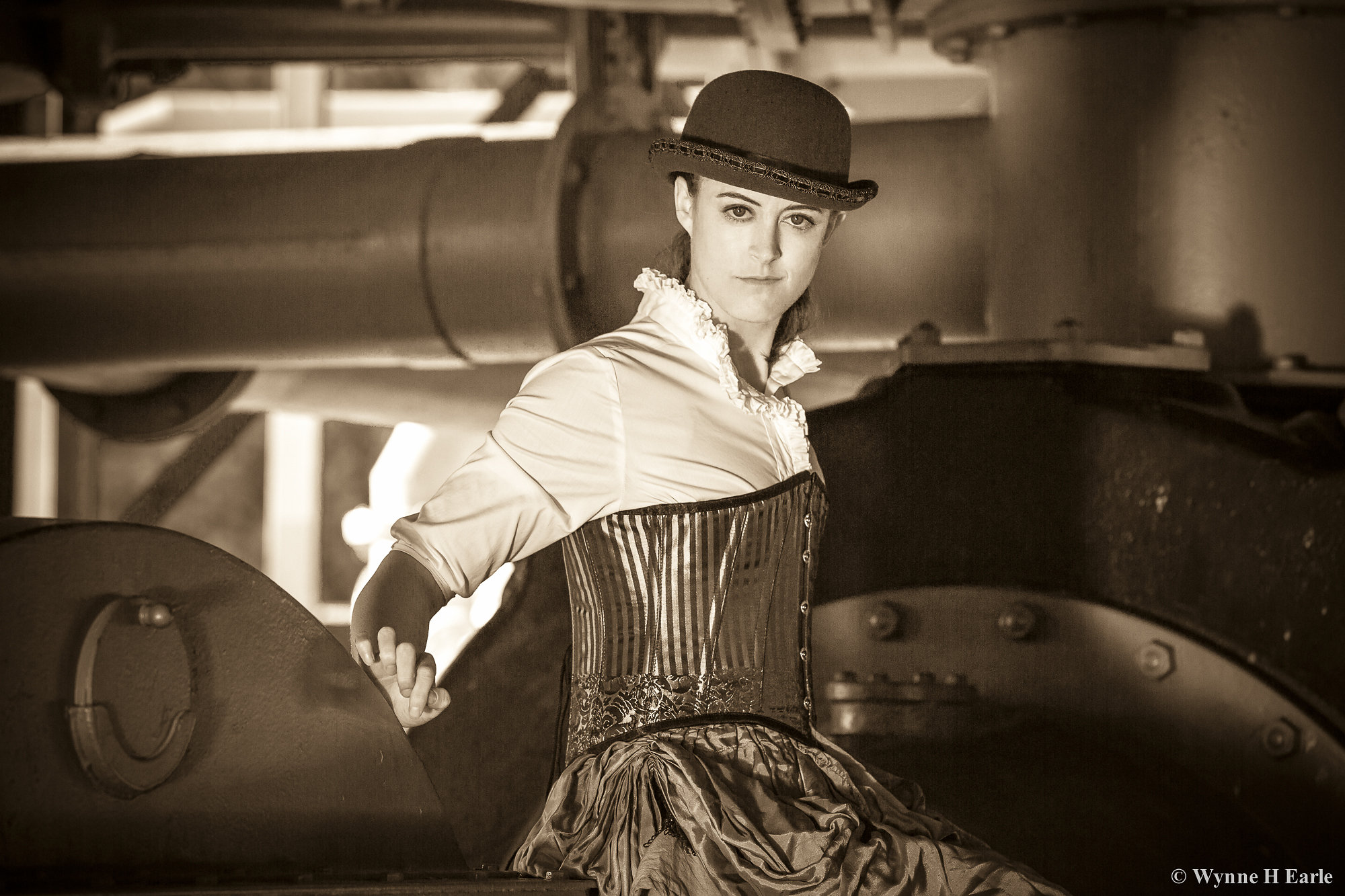 Katherine Grant-Suttie is our original and unsurpassable Gwendolyn Brass, as well as a co-producer at Battleground, where she’s worked as an audio engineer, graphic designer, and about a hundred other jobs at one time or another. She’s also driven and something of a workaholic, so it was harder than you might imagine getting her to sit down for a profile (even if you live with her).

Born and raised in Washington, DC, her path to acting wasn’t particularly unusual–a child’s delight at the sound of the orchestra warming up for The Nutcracker as the houselights dimmed; school plays, classes, a nearby puppet theater; then the first professional production that caught her and wouldn’t let go. But the performance that inspired her was a bit unexpected, at least for an eighth-grade girl: the actor Wallace Acton as Richard III. 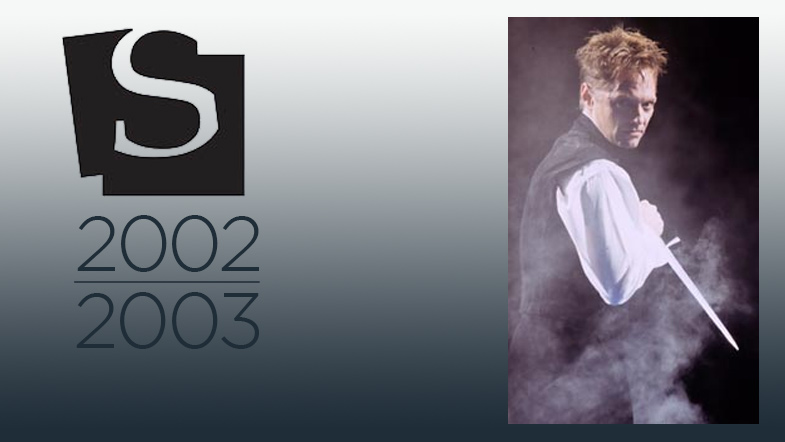 “The entire production was amazing–very dark, very violent,” she remembers. “And it was Richard III! He’s sexy and seductive and you hate him and he scares you, and this performance, what the actor brought–it was an ‘oh my God, that just happened, in front of me!’ moment that I’ve never gotten over.”

She began scouring through the programs of every play she saw, tracking where the most impressive actors had gotten their training. After finishing at The Cathedral School in DC she was accepted at the prestigious Tisch School of the Arts at NYU, and plunged in headfirst.

The classes were demanding, but less about academic standards of homework and workload, and the harder-to-measure questions, like the quality of engagement in a scene, and being in the moment. “‘How deeply are you bringing your emotional self?’  was the sort of question you have to answer, and I had to learn to tune my internal meter so I wasn’t always wondering how to measure that quality.” 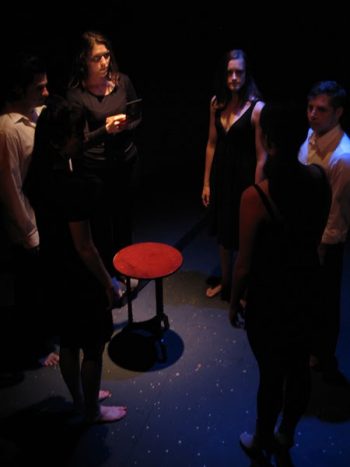 Soon after graduation, a boyfriend in the military led to a transfer to the Pacific Northwest and Seattle, where she worked in theaters both small (Open Circle, Theater Schmeater) and large (ACT, as the daughter in Lewis Black’s One Slight Hitch). But the town wasn’t a good match for her, culturally or professionally, and she headed to LA with an eye not just on potential film and stage work but her growing passion for motion capture for video games and film. 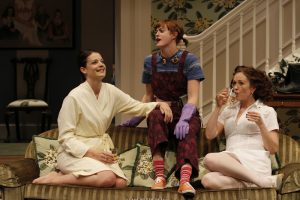 This first trip didn’t work out as she had hoped. “I was down there before I was ready to take on the business of being an actor, and some things that happened kind of scared me. If you’re not careful, LA can make you feel very porous, because your dream gets caught up in everyone else’s.” She returned to Seattle, though continued working on projects in both cities. 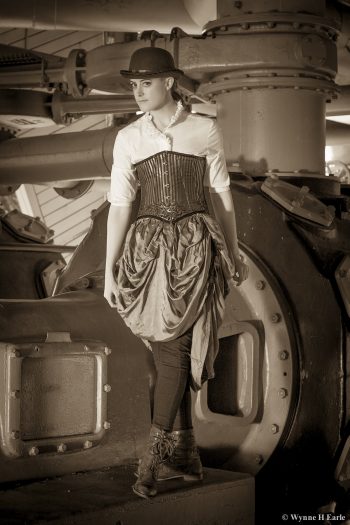 While in Seattle, however, the writer of BRASS had approached her with the idea of playing the daughter in his new adventure series. “He’d created and started writing Gwendolyn before he realized how well it might suit me,” she explains. “So I began from that, approaching playing her as a best version of myself, more courageous maybe, better at all the things I want to be good at–fighting, acrobatics, thinking on my feet. Her frailties and insecurities aren’t insurmountable. She gets down, but she doesn’t get depressed, for example. So yes, a more stylized, best version of me, delightfully and unconsciously birthed from writer and actor, an augmented fantastical self.” 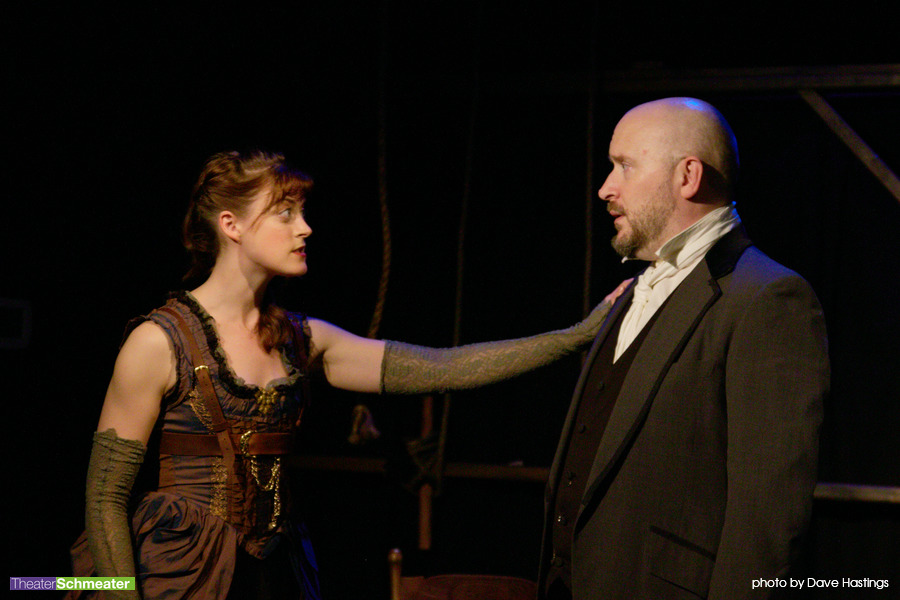 It was an excellent fit; the gamine young actress had a facility in accents, a background in martial arts, an iron will, and an openness in exploring new mediums like audio drama.

While the end of Season Four finds Gwen in many ways back where she started in Season One, Ms. Grant-Suttie believes that her heroine has learned a fair amount. “She’s had her heart broken a couple of times,” she says. “For someone so gifted at manipulating people and changing disguises and conning her way into situations, getting her heart trampled on may have given her insight into the way she treats people. I don’t know if Gwen will ever be the actress she says she’s hellbent on being. But unlike Gwen, I’m an actor for what I think are more substantial reasons than being in a West End play. Her dream might need to be reviewed.”

With the conclusion of the current story-line, Ms. Grant-Suttie has a few regrets about what she hasn’t had a chance to do yet as Gwen.”I’ve had a chance to do a little bit of the acrobatics, but I’d love to scramble up rooftops in a bustle and a corset. I’m also thinking we fight the same way, and I’d love to film that.” 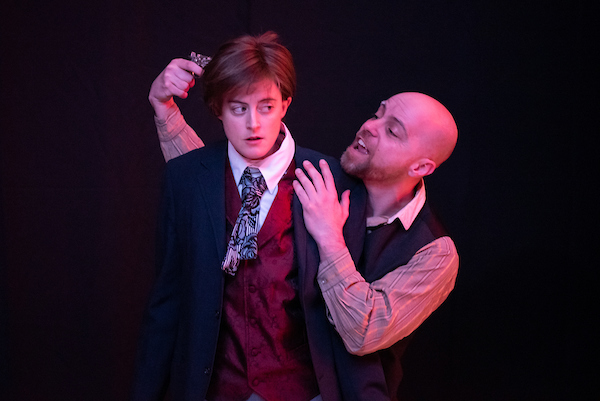 As Dorian Gray with the Experience Theatre Project

Outside of Gwendolyn, the actress is often cast as characters with dark and even terrifying edges, including a much-lauded performance as the title character in Experience Theatre Project’s immersive Picture of Dorian Gray in 2019, as Inez in a ZOOM production of “No Exit” in 2020, and in her meditation on Shakespeare’s great villain in her short film “The Iago Epilogue,” which re-imagines the character in a gender-swapped modern setting.

As the title character in The Iago Epilogue

An odd truth about KGS is that despite her ingenue-like prettiness, her face and angular body can also evoke the inhuman or alien. “It’s like I have an inbuilt uncanny valley,” she admits. “I can just look at people with my eyes wide open and they freak out a bit.” As to her interest in the monstrous and the mad, it’s partly the additional complexities of darker characters, but also their effect on an audience–like her own seminal experience of Richard III. “I enjoy unsettling people, because that’s when they usually see their own dichotomies, and open to a different perspective.” 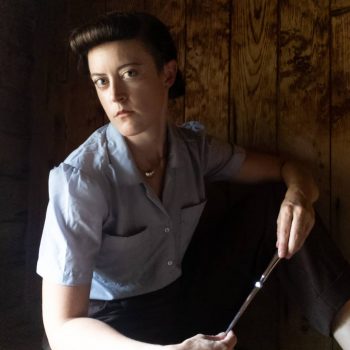 Inez in Experience Theatre’s production of No Exit

It also suits her own lurid and sometimes very dark imagination. “I’ve always had nightmares and powerful dreams, a strong subconscious self, and since I’m often exploring my shadow side and in conversation with it, I might as well use it.”

Now relocated in Portland, she’s used her home base to pursue the LA scene at something more like her own pace. “In the Pacific Northwest, sometimes it’s easier to hear your own thoughts, and it’s less likely you’re going to run out of time, money and energy. It’s a good place to get yourself ready. An artist’s life is not a marathon. It’s a series of sprints, and a series of recoveries, and you have to navigate both.” 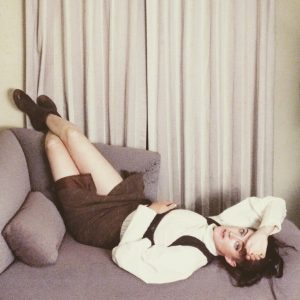 Gwen as Glamor Model, The Kinesigraph

Even during the pandemic Ms. Grant-Suttie has been ambitious and industrious, and is currently producing a series of original scenes for a casting reel–though she’s no idea what roles will be coming her way post-BRASS. “I don’t think I’m going to get a character like Gwen for a while, so I hope she continues in the other forms that we’re exploring, particularly our proposed television series. I’m a jobbing actor, and I’m chasing that experience through almost any genre and medium that’s available to me.” 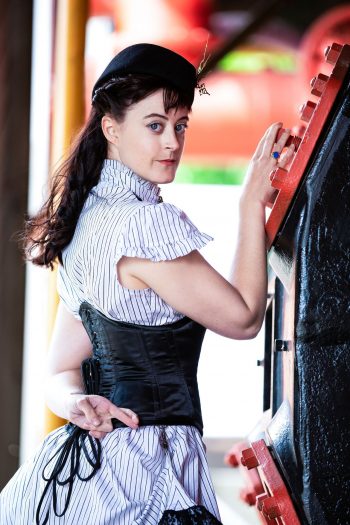 As long as she’s jobbing, we’ve always got a role for her: the ever-charming, ever-formidable, ever-elusive and occasionally surprisingly vulnerable Gwendolyn Brass.