The Eighth Annual Brass Screw Confederacy ran from June 7th to the 9th this year, and we at BRASS were there not just to participate, but to report. 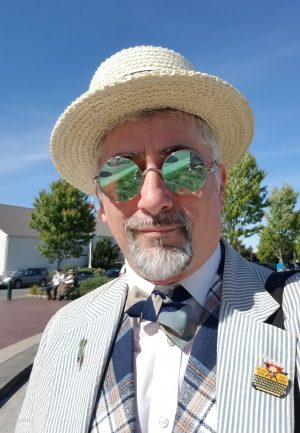 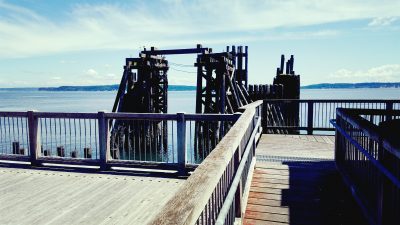 Held yet again in the almost impossibly quaint downtown of Port Townsend, Washington, out on the Olympic Peninsula, this year’s Confederacy was the best-attended yet–helped, it must be said, by the demise or postponement of three other Steampunk Festivals this last year in Seattle, Bellingham and Portland. 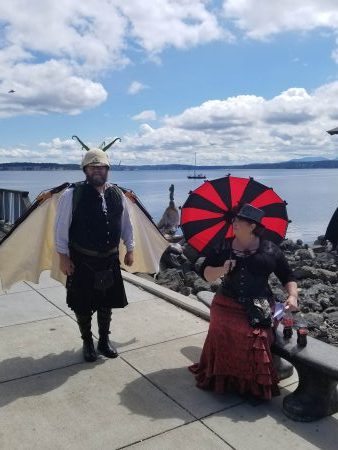 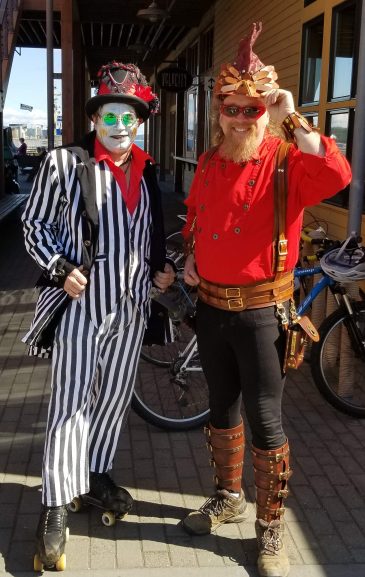 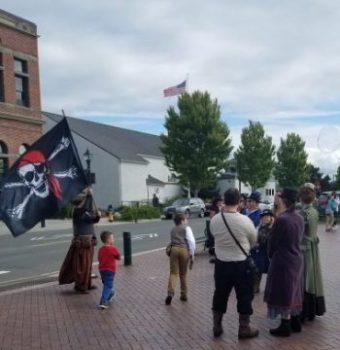 And pirates. Because it is a waterfront. 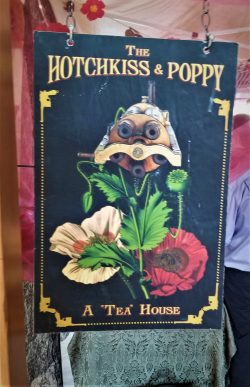 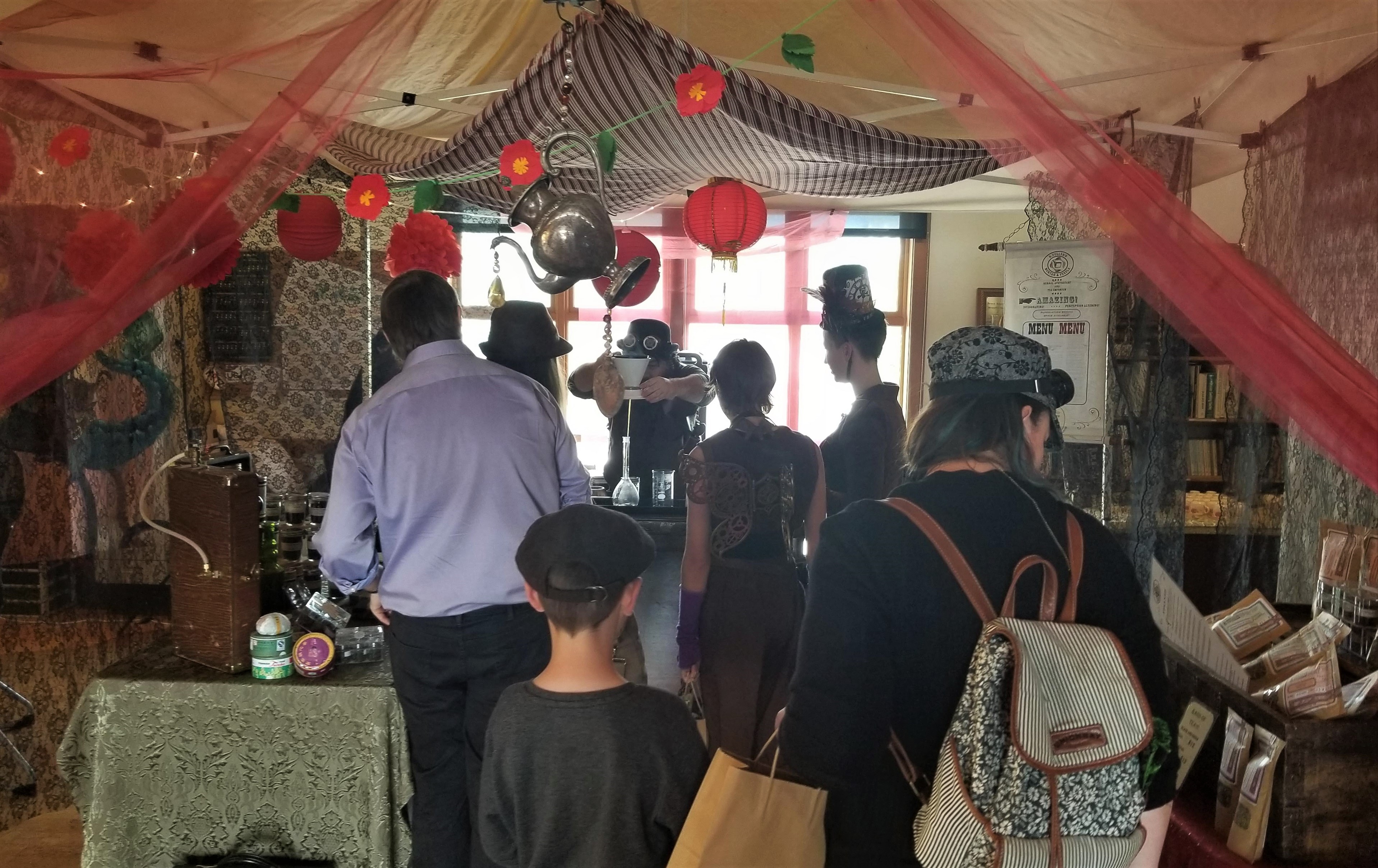 One of the most charming aspects of Brass Screw is that the entire downtown district, conserved by the fortunate neglect of a 19th century economic miscalculation that the railway would find terminus in the port town, embraces the Steampunk aesthetic with window displays and special sales. 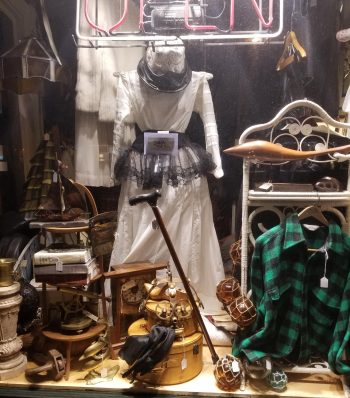 Meanwhile, out on the water…. 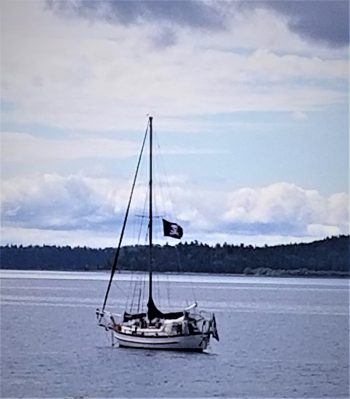 More pirates. A surprising number of pirates, really, for a Steampunk Festival.

This year’s theme was “Mad Scientists,” which included lectures on polar expeditions, laser demonstrations, and quite a collection of inventions at the Bodger’s Hall. 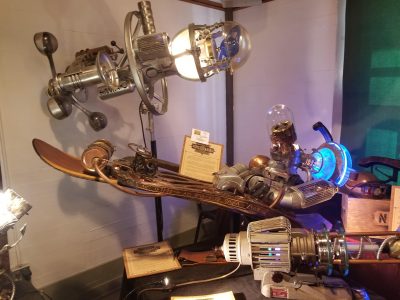 Several attendees took the cue to work ingenious inventions into their costumes, including this elevated gentleman.

And this gentlewoman, Professor Euphoria Bustlestitch, who boasted an elaborate steam-powered bustle. 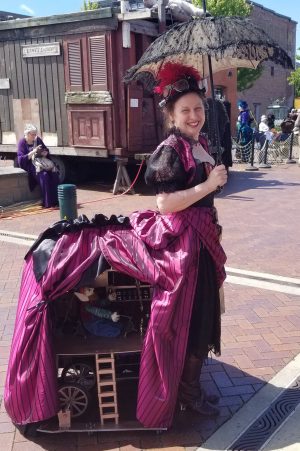 And for those in need of teatime while on the go, an ideal solution.

Quite an elaborate tea trolley.

Meanwhile indoors, a fine collection of entertainments and lectures, and a few that managed to do both, such as a Historical Conjuror. 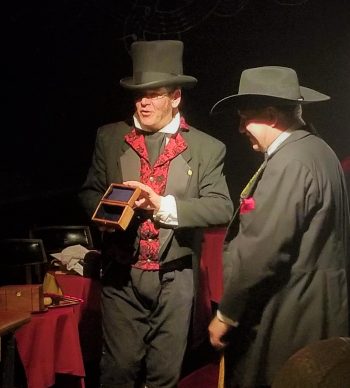 Professor Elemental, the purposeful purveyor of Chap-Hop, was on hand for a reading from his new book of short horror stories, sending the flesh creeping in a story of an English gentleman who decides to answer the disturbing question of what a swan might taste like. 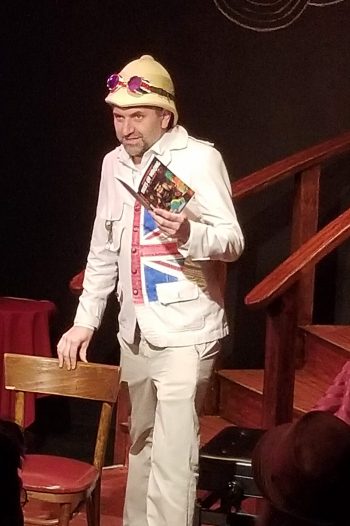 A moment of high descriptive drama from Professor E.

Both Friday’s Hootenany and Prof. Elemental’s show on Saturday evening were well attended and quite a lot of good fun, with Friday featuring live music from Douglas Francisco and the Shaky Barbers…. 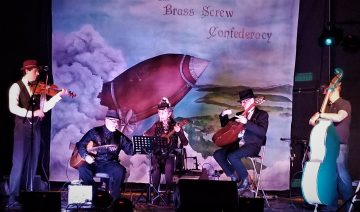 But this correspondent’s spent most of his evening in his favorite fin de siècle indulgence, the Absinthe Tent. 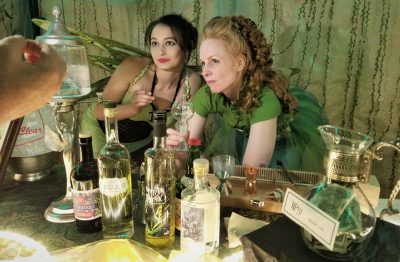 Absinthe fairies in their element. 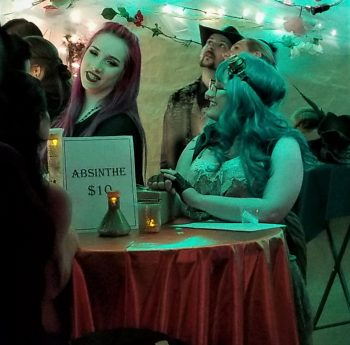 Even the security at the absinthe tent is beautiful. 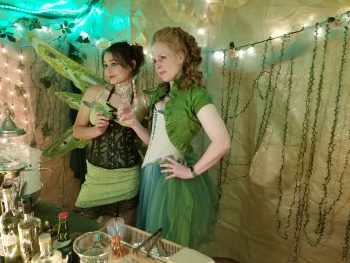 Next day, after a suitably late rising to counter the effects of absinthe, we attended the newly-revived Brass Screw Fashion Show. 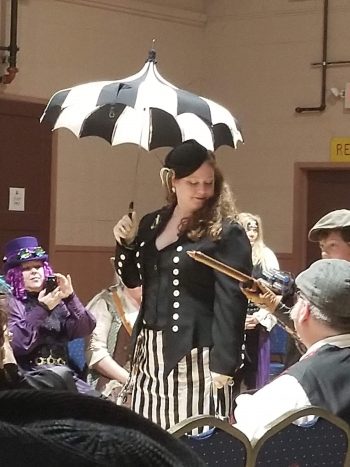 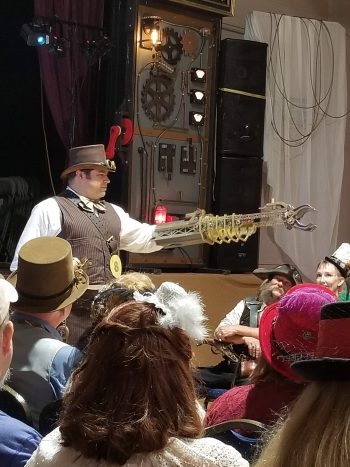 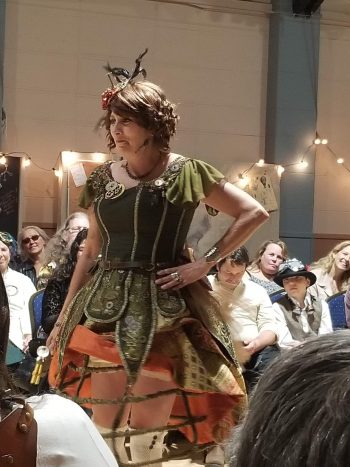 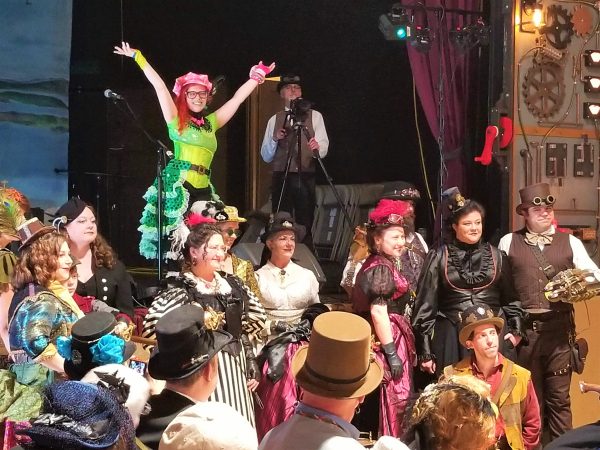 Our host Dogwood presents the participants in the Fashion Show Finale.

Saturday night, and the Professor takes the stage for an electrifying (or galvanizing?) performance of the very best in Chap-Hop and rabble-rousing. 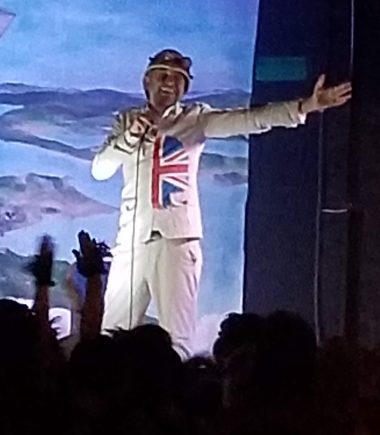 The Professor in his Element.

By Sunday’s wrap-up from the Brass Screw’s Creative Director and omnipresent MC, Nathan Barnett, it was clear as the skies above that Year Eight for the Confederacy had been its best yet. 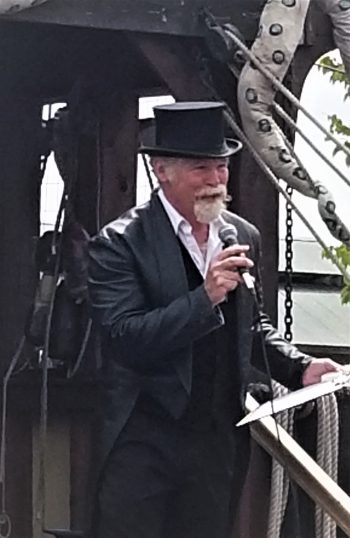 The Brass Screw’s Mastermind at the Closing Ceremonies.

With attendance at an all-time high and both participants and vendors in high spirits, the special guests for Brass Screw 2020 were announced, popular Steampunk band Abney Park.

And so the merry throng dispersed. But not without leaving a lasting impression of Steampunk on Port Townsend. Here’s a sampling from the pocket of one junior participant, all found on the sidewalks of town. 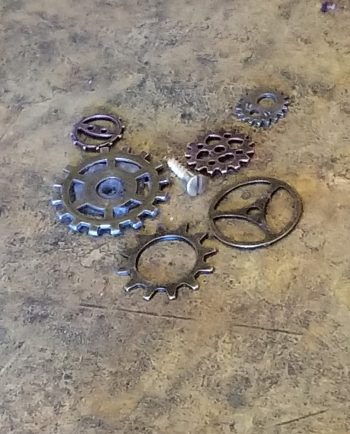 That’s right. The town is so immersed in Steampunk that it’s raining gears.