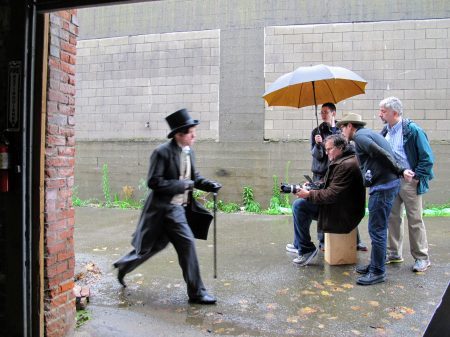 Holt (Tom Stewart) on location for “Dollymops”–glamorous location being an empty alley on a very rainy day.

As we pull this week’s version of the Bulletin together, we’re also assembling our pitch package for NATPE, a virtual TV producer and distributor conference. This is the third conference we’ve attended in the last couple of years, and only the second that (thanks to COVID) is virtual.

In the last five years we’ve produced BRASS plays, BRASS podcasts and even three short BRASS films. But we’ve also had some interest–SOME–in BRASS as a TV or equally-sized serial entertainment, so we’re working to see what might be possible. 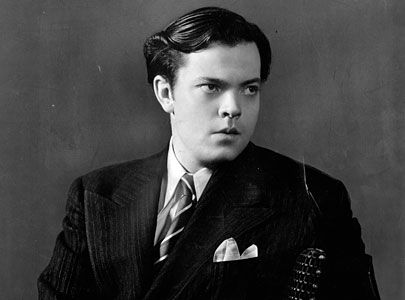 Orson Welles once said that film-making is the only art form where the artist can’t afford the paint set. That goes doubly true in the era of Peak Television, where up till recently it’s been a regular state of affairs for a TV Series to run from upwards of $1.5 million up PER EPISODE. (Our current pitch sees a BRASS TV Series running between $800,000 and $2.5 million per episode–a thrifty bargain!)

Consider: the average cost of a season of recording, editing, producing and distributing BRASS as a podcast is between $8,000 and $10,000 a season. A stage production of a BRASS play runs between $10,000 and $20,000. And a short film like The Lair of the Red Widow, with a running time of under 15 minutes, was over $16,000. Yet all of these mediums are exponentially cheaper than TV. 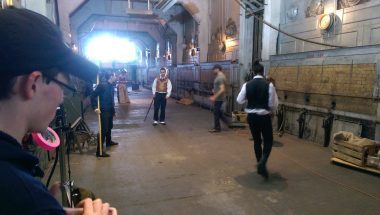 Yep. About a thousand dollars a minute to do it this way–indie and ultra-low budget.

I guess what I’m saying is: WOW mainstream film and television are expensive. Far past the point of either personal finances or crowdfunding, and arguably to a point where it seems immorally profligate to be spending so much on creating entertainment.

I guess it’s because as a story BRASS seems to want the biggest canvas we can give it–even if it’s one we can’t afford to create on our own. What started as a fun cliffhanger adventure series has grown in scope and seriousness, in large part because current circumstances demanded it. We have some big things to say with BRASS, and we’d like the chance to say them in the biggest medium possible.

Winding down producing BRASS and winding up to pitch it, we’ll see what this year brings. Will we be part of what people want to see at the end of such a tough and tumultuous time for our nation and world? I guess we’ll find out!