The Knack and How He Got It 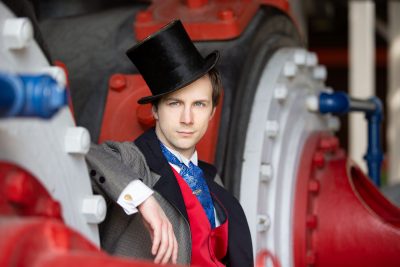 Ever-dapper, always up for a scrap.

When Jeremy Adams auditioned for the role of Cyril Brass back in 2015, it seemed less like he was auditioning and more that he simply picked up the script and WAS Cyril—the charm, the diffidence, the dandyish swagger were all there at once. For the last five years, Adams has played the martially adept young son of Lord and Lady Brass in film, on stage and through our podcast, a surprising development for a young man who when he joined up with BRASS was pursuing a career in musical theatre.

Adams grew up in small-town Montana and came out to Seattle with plans to eventually head to New York for school and the stage. But a trip soon after with his mother to Edinburgh resulted in him seeing a life-changing production of Cats, Andrew Lloyd Webber’s legendary hit musical. Under the heady influence of the T.S. Eliot dancing moggies, he devoted himself to figuring out how to get on the musical stage. “I took classes in dancing—ballet and tap, as well as voice. Anything I needed to just throw myself into the mix.” Looking back, Adams is surprised at some of the roles he got as a result, as “some of my auditions early on were nothing short of rancid.” Still, he landed good roles in stalwart companies, including productions at Seattle Musical Theatre, Tacoma Musical Playhouse, Second Story Repertory and Leavenworth Summer Theatre, as well as a performer in a 5th Avenue School Tour. 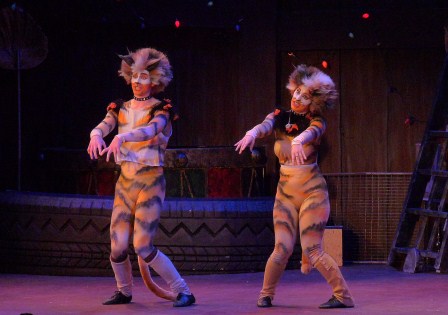 Yet the progress was slow, slower than he’d hoped, and he felt the lack of professional training was holding him back. “You don’t need a degree in musical theatre, but it sure does help,” he says with a laugh. And he wasn’t sure further education was feasible or affordable. “Then in the midst of all this, I saw the BRASS audition notice. I read the sides and thought ‘why not? I might have a knack for that.’”

The “knack” included an ear for accents and a deep interest in SF genres and subgenres. “As a certified nerd, this seemed like the sort of thing I could get into. A lot of what the fantasy artists I like best were doing was Steampunk, so I felt like I understand the genre and its tone and rules.” 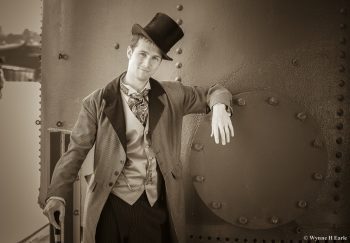 Jeremy in our 2015 BRASS Photoshoot

As for accents, it’s been both natural ability and a study of linguistics that helped him hone in on Cyril’s flippant take on Received Pronunciation (RP), the standard upper class English accent. And it’s been a lot easier than others he’s taken on. “The toughest I think was for [Martin McDonagh’s] Cripple of Inishmaan. It’s set on the Aran Islands off of Ireland, and the accent is not only extremely thick and specific but if you take a wrong turn it can come across as Scottish.”

The voice was where Jeremy began with Cyril, but before Season One of the BRASS audio drama had even come out he was preparing for his screen debut in our short BRASS film The Lair of the Red Widow. And while it’s one thing to play a fashionable young clotheshorse, the script demanded a lot of complicated fight choreography for a sequence that sees him fighting multiple opponents with fists, kicks and eventually a sword cane. “I’ve got some martial arts experience, including a black belt in Tae Kwan Do, but I’d done very little film. I had to trust everyone, especially [fight choreographer] Tim [Ruzicki], who had to do a lot of improvising on the spot, partly to adjust around the surroundings.” 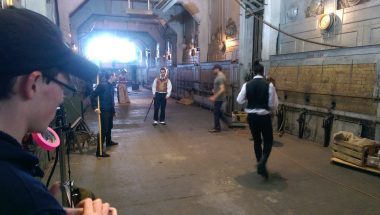 Shooting the Cyril vs. Everybody fight in Red Widow

Fortunately his various opponents were all trained martial artists (including the much-acclaimed Restita DeJesus, our swordswoman). “The entire company were so good, and so much fun to work with. As to learning the moves…six years in martial arts, a couple years in ballet, it’s all the same: mindless routine and repetition.” The result really allowed Adams to show off some serious fighting chops. 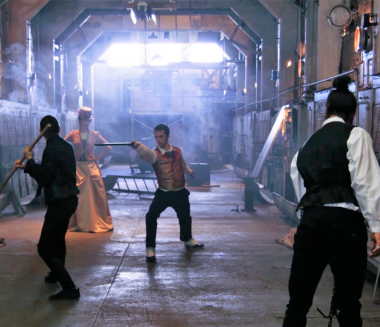 What makes Adams’s performance work is the juxtaposition of a careless bon vivant with a formidable fighter. “Cyril has sort of an indifferent, detached air of disinterest in general,” he explains. “It’s partly being distanced from people because of his talent for violence. But he’s also just young.” 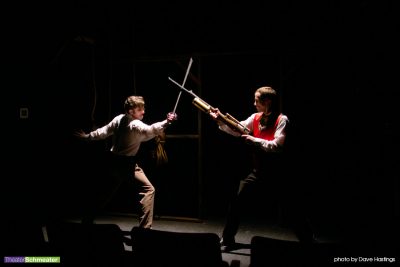 Adams honed his characterization still further while playing the role onstage in Fatal Footlights at Seattle’s Theater Schmeater. “It’s been fun discovering what he’s not good at, like relationships and people in general. This was more to the foreground in Footlights, as he’s having to solve this mystery with all these perplexing people, including a belligerent Russian agent and a nice-looking and sexually aggressive young man. He’s out of his element, and as an actor that’s interesting.”

Last year Adams left Seattle to follow his wife Liz to Fort Collins, Colorado where she’s pursuing a postgraduate degree in Music Therapy. This has meant another professional twist and turn into launching a full-out career as a Voice Over actor. 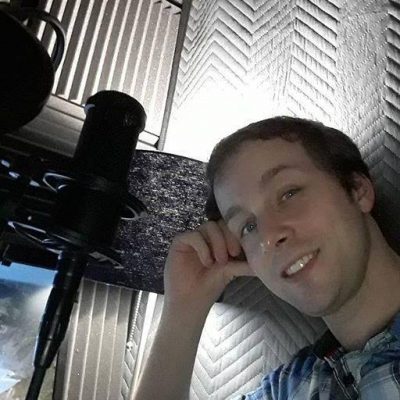 Have Booth, Will VO.

“It’s still a slow build, but you can start out with virtually nothing and work  your way up, which is what I’ve done. Lots of email marketing, lots of reach outs, building a home studio—with COVID that’s pretty much a requirement.” His work has paid off in getting representation and some good commercial gigs, but the pandemic has also created a newly crowded field. “There’s more work, but a lot more talent—stage or film actors who can’t work, and amateurs trying it out.” There’s no answer but tenacity. “If you have a business mindset, you can do pretty well. It’s a real numbers game.” As an additional avenue for creative play, he’s also started his own game streaming channel on Twitch under the nom de guerre Commander Extra. 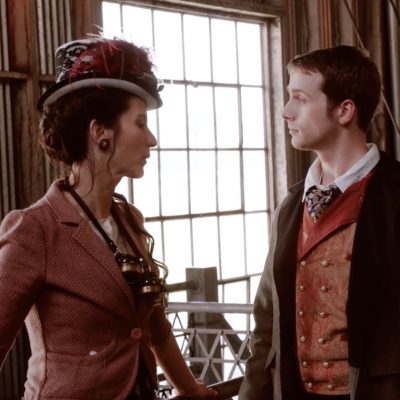 While the current season of BRASS brings the story to a close, for now, Adams says he’d be thrilled to jump back into the role in whatever medium should present itself. “Absolutely. That character is way too much fun not to.” That’s good for us to hear, as it’s hard to imagine anyone else being quite as much fun in the role.