Middleton as John Ruskin in “The Countess” by Gregory Murphy (2004)

On stage, Matt Middleton is Mr. Nice Guy. He’s tremendously good at creating characters who though often deeply flawed, still remain relatable. There’s an aspect of easy-to-reach vulnerability in his work that’s appealing from a tall, good-looking man, a sort of benevolent if tentative attempt to Get It Right, whatever It might be.

Regrettably for dramatic irony, Middleton is also, by general Seattle community agreement, Mr. Nice Guy offstage as well. Funny, thoughtful, and diligent, he’s the fellow you want in the sinking lifeboat with you (as we can attest after sinking a couple of theatrical lifeboats with him). You may all go down, but he won’t stop bailing.

We first worked with Matt way back in 2003, for a production of Gregory Murphy’s Victorian drama “The Countess” at Theatre Babylon. Cast in the role of the great Victorian writer and art critic, John Ruskin (it helped that he’s a dead ringer for Ruskin), Middleton managed to portray a somewhat priggish and emotionally stunted figure in a way that still let you be captivated by his intelligence and justifiable pride in his works. 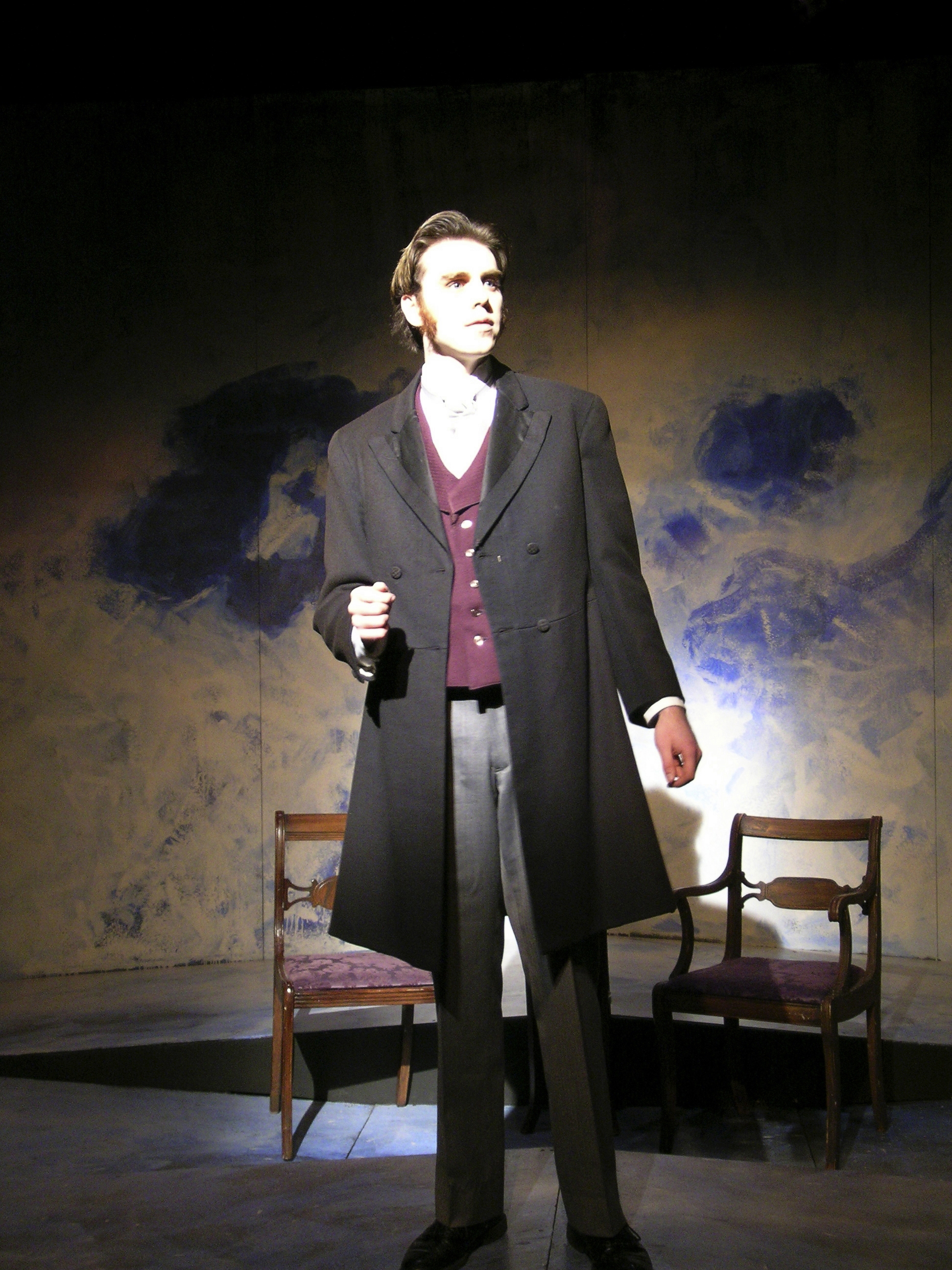 Other shows followed at a variety of venues, and in 2014, he joined the cast of BRASS for Season One of the Audio Series playing several different characters, most notably our lovelorn Lord Whitestone, also known as Tuknor, King of the Ape People.
We recently caught up with Matt to learn about what got him into theatre and what keeps him there.
BB: How’d you get into acting?

MM: Honestly, it’s hard to say. I’ve basically always done it. Ever since getting a leading role in a 2nd grade play (I had a monologue and everything), it just cemented in my head that “this is a thing I do.” But I think the commitment to it really formed in high school; as an awkward teen, theater was the only place I felt like I fit in and could really be myself…which is admittedly ironic. Added to that was learning about the little families that casts can grow into, the bonds that form through those crazy shared experiences. Much as I love to create interesting characters and challenge myself to live honestly in them, the biggest thrill for me to this day is still that moment when you realize you’re part of a cast that has gelled into a truly strong ensemble.

BB: For as long as I’ve known you, you’ve juggled acting with a day job of some sort. That seems both fairly normal in the arts and also a real strain. How have you managed it? Which jobs have been an easier match, and which are harder?

MM: It’s never been easy, but it was certainly easier when I was younger. That was partly due to having the energy of youth, and partly due to being a pretty terrible actor who didn’t understand the amount of time and effort he should’ve been putting into his work. As I’ve grown and developed that understanding, the juggling act has definitely become more difficult, which has greatly reduced the amount of acting work I feel I can handle in a year. It’s been a particular struggle over the past couple of years, as I’ve been moving into positions of greater leadership in my day job that require a much higher degree of creative thought and problem-solving. The jobs I’ve had in the past that involved more repetitive tasks made for a deeper well of creative juices available when I got to rehearsal; in my current job that well can sometimes feel nearly tapped-out by the end of the day. Thankfully, with the right show and production team, the energy I feel walking into the rehearsal room will generally recharge some of that.

BB: Tell me about some of the companies you’ve worked with, and some of your favorite roles.
MM: I’ve been fortunate to work with a number of different companies during my time in Seattle, including Annex, Macha Monkey, Live Girls, Radial Theater, and the 14/48 Projects. My favorite role will probably always be Adam in Theater Schmeater’s The Creation of the World and Other Business, mostly because it was my first time being naked on stage. I’ll probably never know what it’s like to jump out of an airplane, but every night when I walked naked onstage at the top of that show, I always felt like I was jumping out of an airplane. Beyond that, I was lucky enough to play Charles Babbage in Live Girls’ production of Darien Lindle’s The Secret and Impossible League of the Noosphere. In addition to being a brilliant production of a wonderful script, this show resulted in one of the strongest ensembles I’ve ever been a part of. It was also fascinating to play a historical figure, an experience I also very much enjoyed portraying George Bernard Shaw in your play.
BB: For BRASS, which you’ve performed on both stage and as a podcast, you’ve played a wide variety of roles, from a Jungle Lord to George Bernard Shaw, from the Prince Regent to a Scottish security officer, along with a whole mess of thugs and villains. What have been your favorites among these? What is your own method for giving each of these characters their own distinct personality, even if it’s only for a few lines?

MM: While Whitestone will always be my favorite, as I said playing Shaw was an absolute treat. It’s really fun to research and get to know a historical figure as part of preparing a role; you have the lines in your script that all actors have, but you also have all these things they’ve written or things written about them. Those can almost become like a second script you have to untangle to figure out what makes this character tick. As for the smaller roles, it’s a combination of trying to immerse myself as fully as I can into the world, and then playing with whatever inspiration comes out in the moment. For the Scottish security officer, I just decided in the instant before I started reading it that he hated his job; just a little nuance to make him feel like a lived-in character. And if I’m being honest, being surrounded by the wonderful artists you bring into this project really helps fuel that inspiration and spirit of risk-taking.
BB: As Lord Whitestone you’ve had to channel your inner ape man, an amazing athlete raised by intelligent apes and now newly returned to England. What are the challenges of playing such a character, who’s also a bit of a heartthrob?
MM: I think the main challenge, and also the main delight, is he simply doesn’t grasp how otherworldly and Adonis-like (your words) he is. I once read an article that theorized cats don’t see human beings as a different species; they just see us as really big, really dumb cats. I think Whitestone is a bit like that. While he consciously understands he is a man raised by apes now living among men, unconsciously and instinctually he just sees everybody as smaller apes. So it doesn’t necessarily occur to him that not everybody can swing from tree to tree or leap over rooftops. On the flip side, so much of human society is a complete mystery to him, and so much of what we find completely mundane he finds completely delightful and intriguing. How he’d react to new experiences and creature comforts is something I have to always keep in mind.
BB: What are some of the challenges of voice acting in a show like this compared to stage work?
MM: I think for me the biggest challenge is the lack of connection with my scene partners. Being primarily a stage actor, it never really occurred to me how important simply being able to look your scene partner in the eyes can be to creating an honest, lived-in performance until I was suddenly standing in a booth, staring at a microphone. Finding those connections when you only have their voice to go on is a very different animal. It’s also tricky to shift to a medium where little to none of my physical reactions and choices are going to translate. You can’t hear my eyes roll, or my mouth drop open, or my head tilt; none of those reactions are going to exist unless I find a way to vocalize them. Working on this project has really deepened my respect for voice actors, who need to generate so much life with only what a microphone captures.

With Katie Driscoll in “Etymology” by Jennifer Jasper (2015)

BB: These days there’s a lot of terrible examples of misbehavior, criminal and otherwise, among powerful white men, and a lot of pointed criticism against them in the arts, the theater in particular. Has this reckoning affected the sorts of roles you see offered or that you take? Do you think this is good, bad, or problematic?
MM: It’s definitely added more layers to the choices I make, but I think it’s a positive overall. For one thing, this is a conversation our society is having, and theater should always be a vital part of society’s conversations. There are members of our community who have stories that need to be told, and if I’m not representative of those stories, I’m happy to step aside. And as for conduct, a theater space needs to be a safe space. The artists working in that space need to feel safe enough to be vulnerable, to take risks, to be willing to tap into things within themselves that can be ugly and overwhelming. I think it’s incumbent on everyone who works in any theatrical art to keep it that way, to call out behavior, to support and help create a place where everyone feels empowered to do their best work.
BB: What’s up next for you in 2019?
MM: In October I’ll be working on an adaptation of HP Lovecraft’s The Call of Cthullu, which will be opening at West of Lenin on Halloween weekend. I’m guessing this will involve me going mad, or dying horribly…or possibly going mad before dying horribly. It should make for a nice, relaxing fall project!