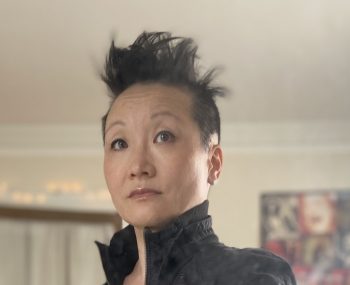 Aimee Decker is one of the rare members of the BRASS company to have performed in all three of our mediums. Twice on stage and once on film she’s played Tommy Moore, one of the cunning criminal cabal known as The Watch and Chain Gang. And this season she premieres as Madame Hao, a Sino-Scot kingpin in this alternate century’s tech industry.

All of these characters share a quality with Aimee: they walk a line between two cultures. In her case it’s also been a path with a lot of switchbacks.

An adopted Korean-American, Decker grew up in West Glacier, Montana, a town of about 350 people. “Middle of nowhere. My dad was a park ranger and my mom was a teacher. We would get tourists coming through, but that was about it.” Later the family moved to the larger town of Columbia Falls (still slightly under 5,000) where she was a neighbor without knowing it of our Cyril Brass, Jeremy Adams, in nearby Kalispel.

Aimee was “one of those kids who couldn’t sit still, so when I was four, I started wanting to take dance, even though my parents had to drive like 30 miles to get to a studio. At that time and place, there weren’t a lot of options for movement aside from dance—no martial arts or gymnastics, for example.” She was a dedicated student through high school, getting up at 5:00 every morning five days a week for practice.

While they encouraged her to pursue dancing as a hobby, her parents couldn’t quite bring themselves to support her following it as a career, so instead she got a degree in wildlife biology in Oregon. She made it all the way into a postgraduate degree before deciding she was miserable without her art—and headed back to the University of Montana for a BA in Dance. (“I usually win the group trivia of ‘who has the most useless degree,’” she laughs.) 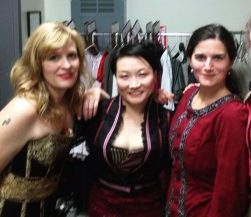 Yet her dance career in Montana was cut short after a year by some challenging health issues, and when she recovered, life took another pivot. “I’d volunteered to do some production management with a dance company, working backstage, learning lighting, rigging, all the run crew stuff. It gave me a similar feeling to performing, an experience that was meaningful, creative and shared with other people. It was another facet of something I was still looking for, so I decided to pursue that.”

This led to a job as Assistant Tech Director in a Norfolk, Virginia roadhouse. “That’s where I learned so much—the companies came in and out, and every one was a different show with different needs to accommodate. It was an astonishing esprit de corps in the crew, an underlying commitment to all of us doing whatever was necessary to get the show on. You get that as an actor and performer, but it’s not the same responsibility.” 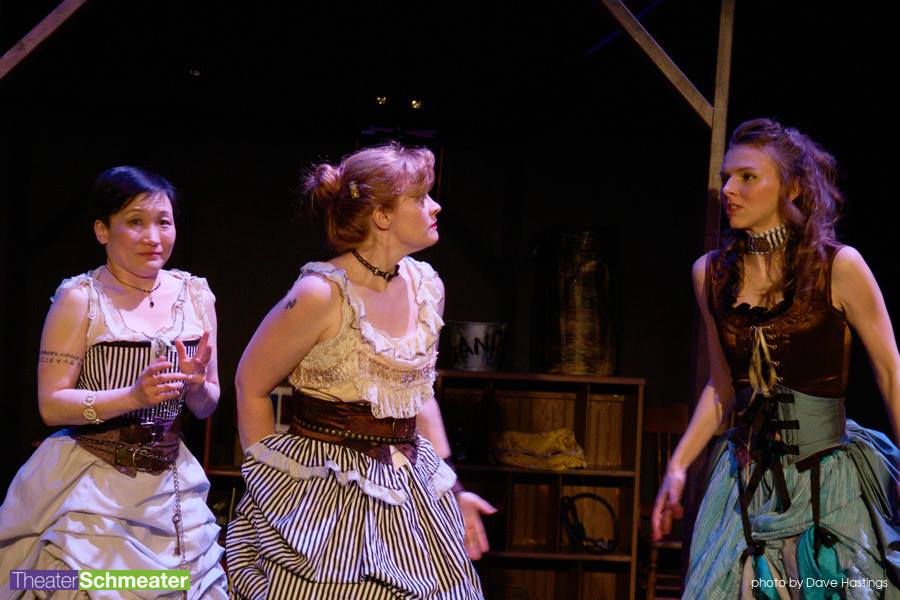 From Virginia she followed her then-partner to New York, where she worked in a design build studio doing site-specific events. “I did a lot of fashion shows—September was all about fashion week and bridal week. That’s where the money was.” But in the wake of the disappointing 2004 election, such work felt trivial. “I felt a little like I was fiddling while Rome burned. I didn’t know what my higher self would be. I wanted some sort of power that would stop the machine in its tracks. So I decided to go to law school.”

This brought her to Seattle and the UW, as well as legal work afterwards—but not satisfaction. “I was working as a lawyer, but I was hating my life, so I quit to take an entry level legal job working for a judge where I could get perspective and think about things. I’d not had an art in my life for about 12 years, and I missed it.”

Then she saw the New York production of Neil Patrick Harris in Hedwig and the Angry Inch. “I know it sounds like a cliche, but I saw it, and it changed my life. There was something about the rawness and the honesty and the storytelling, and what it meant to be who you are. I came to the realization that I wasn’t a lawyer. I’m really one of those ridiculous theatre kids.” She took an adult acting course with Kelly Kitchens at Seattle Rep, and one year later, she had her first audition.

Soon after she was cast in our first stage show, Oh My Azaleas, in multiple roles, including a Nepalese Gurkha. “When I saw the audition posting, I thought ‘there’s something that I might have a shot at!’” (These roles, like many others in the show, featured non-traditional casting.) She did indeed play one of the Gurkhas, as well as a female pickpocket, Tommy Moore, who has a run-in with a pair of murderous thugs. For reasons still mysterious to her, she decided to give Tommy a Scottish accent. “I think it might have been something in the lines and cadence, I just heard her as Scottish.” So the precedent of BRASS having a Sino-Scot was set. 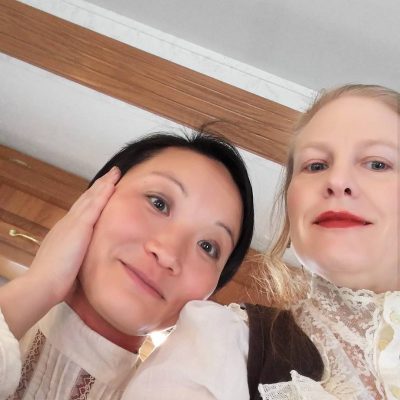 Azaleas also began a friendship with fellow criminal Machelle Allman, who played Tulips Hunt. During the run Allman came up with the name “the Watch and Chain Gang” for the two devious ladies (and their occasional third member), and it stuck—through both the next stage play and our next film, BRASS Bolts: Dollymops and French Apaches. 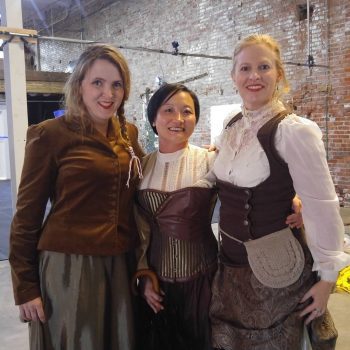 Yet another third member of the Gang, Marjorie Midlands (Stacey Bush), from Dollymops

Part of the appeal to Decker of the role is the opportunity for stage combat under the instruction of our fight choreographer Tim Ruzicki. “Tim’s amazing. He’s so clear and intelligent, and he’s so patient. One thing I learned in this role is that my dance training had me moving almost every time in the wrong direction when I’m fighting,” she says with a laugh.

She’s also enjoyed playing an ongoing character with her own character arc. “It’s such an incredible feeling of collaborative creation. Terry Moore [the Crime Minister] talks about the value when the writers can hear his voice and write with it in mind. And that sets me as an actor thinking. What did these ladies go through? Where did they come from? They come out of a world that’s so different from the Brasses, with this scrappy survival instinct and no alliances.” 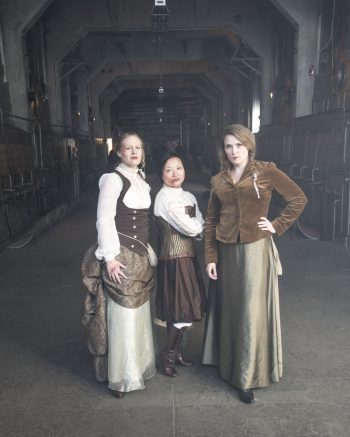 You should see the other guys.

Madame Hao in Season Four, Decker’s upcoming role, is different from Tommy, but also Sino-Scottish; see our related piece here to explain the alternate history behind that. We asked her what was the experience of playing a character who like herself is of mixed cultural heritage. “It makes me feel kind of seen, honestly. It’s difficult for me to reconcile these multitudes of experiences sometimes. An actor/playwright friend of mine is Japanese and Jewish, and she’s really leveraged that combination, that contradiction into her art. Characters who do something similar, who can walk between those two worlds, are really interesting.”

Decker’s focus is now on completing a teaching certificate in the method of Francois Delsarte, the 19th century orator and teacher whose work was highly influential in modern dance, acting, and physical culture. “It’s exploring the universally understood meanings of parts of your body and basic human movement. When you understand these things, you can use your body in storytelling—through gesture, posture and physical presence.” This in turn has led her all the way back to dance—a surprising development, but one she seems to accept with her typical good humor. “I want to learn more. I didn’t think I’d ever be back to studying dance, but you never know what won’t let go of you.” 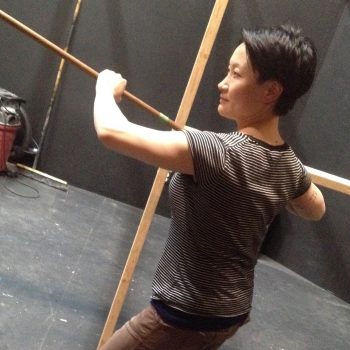