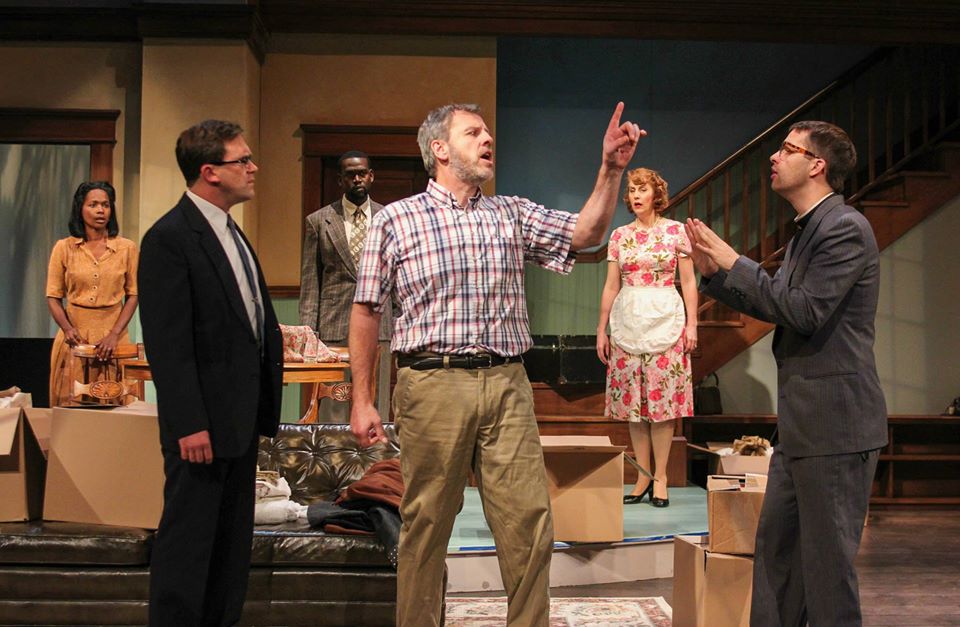 Life is rarely a straightforward journey. Often it’s a series of switchbacks and detours, late starts and unexpected arrivals. Just ask Phillip Keiman. The Seattle-based actor has had a career with as many different twists and curves as you could imagine before depositing this Derby-born Englishman into the center of the Pacific Northwest.

“It’s got quite a close connection to Seattle, actually,” he says of Derby, his hometown and an historic city of the Midlands 120 miles north of London. “It’s where they build the Rolls Royce Aero Engines that are bolted into a lot of Boeing’s aircraft.” A town with deep roots in industry, it was not the most promising place for an actor to grow up, but as far back as he can remember, that’s what Keiman wanted to be, always asking for a trip to the movies with his friends as a birthday present. Each Christmas his parents would take him to the Pantos, the traditional English holiday shows that mix up fairy tales and folklore with riotous song and dance, awakening a love of theatre. But when he told his parents his ambition, his father reply was “actors don’t come from Derby.” 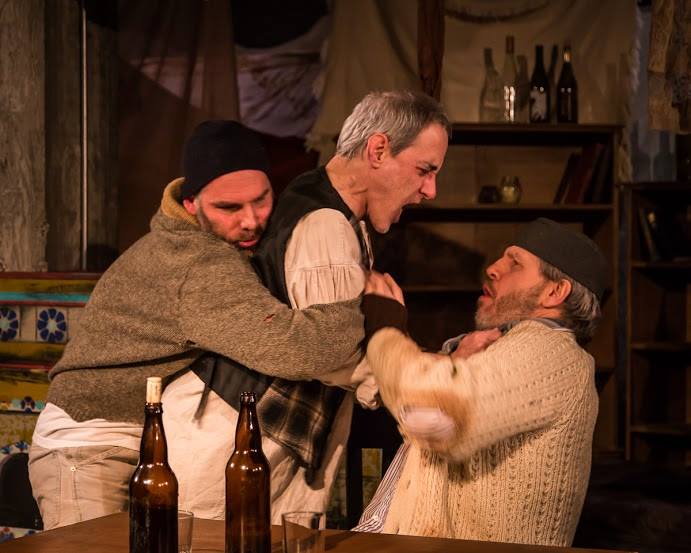 So following parental precepts, he went into a sensible career. “I became an engineer, and that’s the job I held for 20 years, as an AutoCAD Draughtsman.” Yet as time passed, he couldn’t let go of the dream of a different life. “One day sitting in front of my computer I decided that I had get out.” And so in his mid-30s, with neither experience nor education, he became an actor.

His first gig came from a chance encounter. “I was a skydiving instructor at the time, and I’d met a friend who was a Stuntman. He told me that he had an act where he did high falls, 25 and 50 feet, into a big net of sponge pieces. He asked me to join the act, and so in 1997 I went on a tour with him. At the end of it, I had my Equity card.” 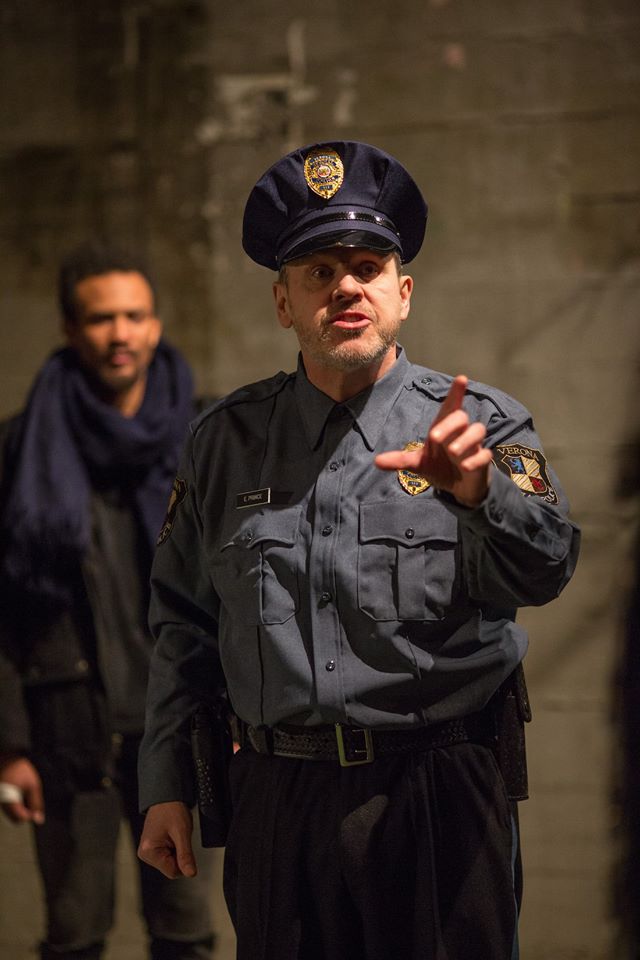 He then followed with a course affiliated with the Royal Academy of Dramatic Art in Nottingham for two years, then down to London to follow up on a stage combat course. “When I was there, I realized the London actors were just at a higher level. I needed better skills. So I continued on to the London Center for Theatre Studies for another year.”

Out of school he joined several Background Agencies which got onto a series of sets as an extra or a bit part. “One of my first gigs was a TV show featuring Clive Owen, and his stand-in for the show gave me an education into what it means to be on a film set,” he remembers. Occasionally it was revelatory. “The only time I was ever starstruck was playing a barman in a film, and I spent a day working on set with Tom Courtenay, David Hemmings, Ray Winstone, Bob Hoskins and Michael Caine. I learned more about film acting in that one day than any other time in my life.”

Other jobs included acting at the Royal Opera House, where he was simulcast to theatres around the world as one of Banquo’s Murderers and flown from the light grid as a dead soldier taken up by the Valkyries. He also had respectable theatrical roles at a variety of small companies, often in Shakespeare plays, including a nationwide tour of castles playing Macbeth. 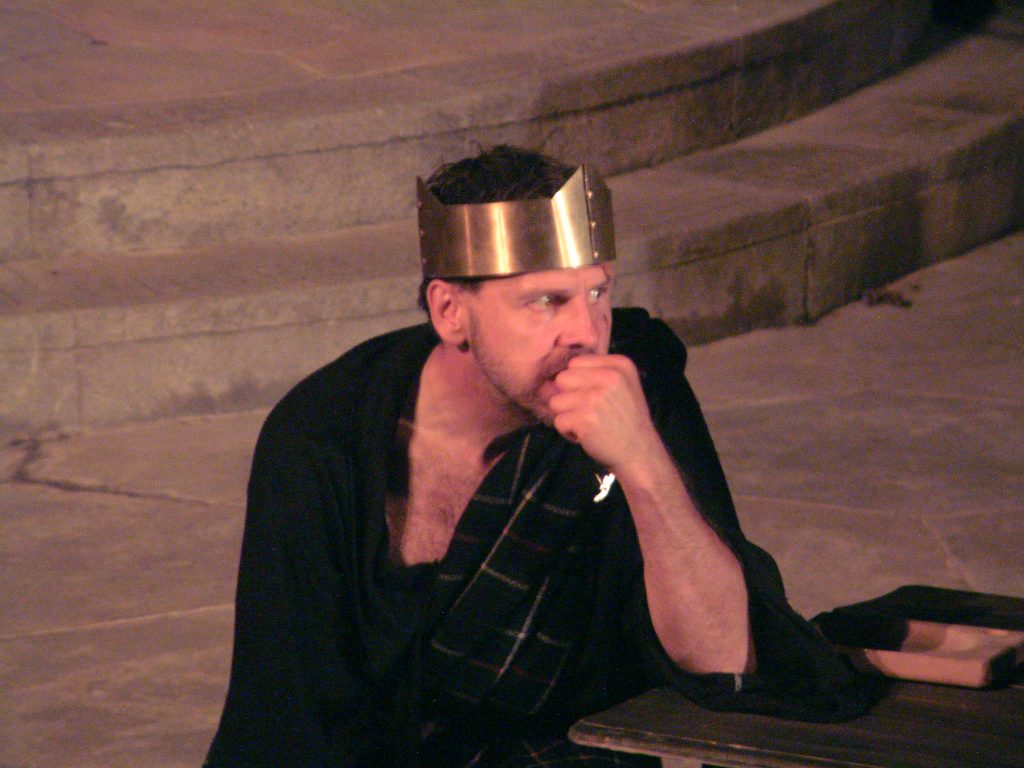 While in London he met and married his “now sadly ex-wife. She was from Seattle, and after we got married we decided after three years to move back so she could spend some time with her parents. Both of my parents had passed away, so I said yes.”
A couple of months before their move, he sent in a resume and headshot to a Seattle theatre, and got his first audition slot while he was still in London. “I flew in mid week, auditioned on the Saturday, got the job and played Santa Claus in a Christmas Show that opened the month after we actually moved to Seattle in October of 2012.”

His winning streak continued when he quickly booked a local agent. By the next year he’d booked his first American TV appearance (on Grimm), and since that time he’s had steady work in the region in film, TV, audio and stagework. “Things have fallen together spectacularly,” he admits. “In London, I sounded like everybody else. But here, my voice, my nationality, really made a difference.” Since then he’s worked with companies throughout the region, including Pork Filled Productions, Harlequin Productions in Olympia, Second Story Rep, Phoenix Theater in Edmonds, Burien Actor’s Theater and Eclectic Theater. 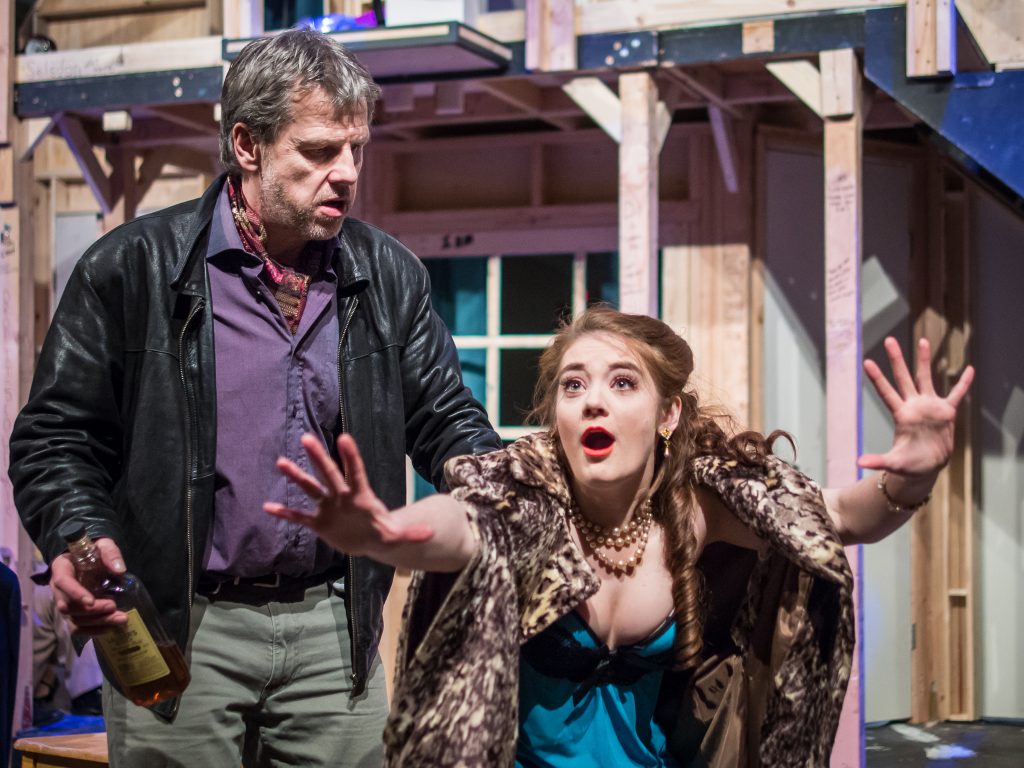 At Eclectic he met Larry Albert of Imagination Theatre, who told him to look him up when he got his SAG-AFTRA Card. Two years later, he began working with first Imagination and its successor Aural Visions. “When I first talked with Larry about working, he told me ‘bring every accent you’ve got from the other side of the pond and we’ll find roles for every one of them.’ It was my fourth or fifth show before I played an Englishman. I played a Scotsman, a Swede, and a German in a Sherlock Holmes, and then I got to play English twins. I think I’m now typecast as their favorite Cockney or working class thug.”

Albert provided him a wonderful education in voicework. “Generally in audio drama you don’t look at the actor you’re talking to, for example, so you can’t rely on them for reactions. So I learned to do extensive scriptwork before we got into the recording studio, getting a firm visual image of each scene. That was a big learning curve.

“It’s also using your vocal range, learning its parameters–finding things like off-voice or different pitches to change the sound that you make. And it’s key to maintain a continuity in the character’s voice. If you’re on stage or on camera, they can follow you physically, but in audio drama the challenge is staying on point with the character vocally.” 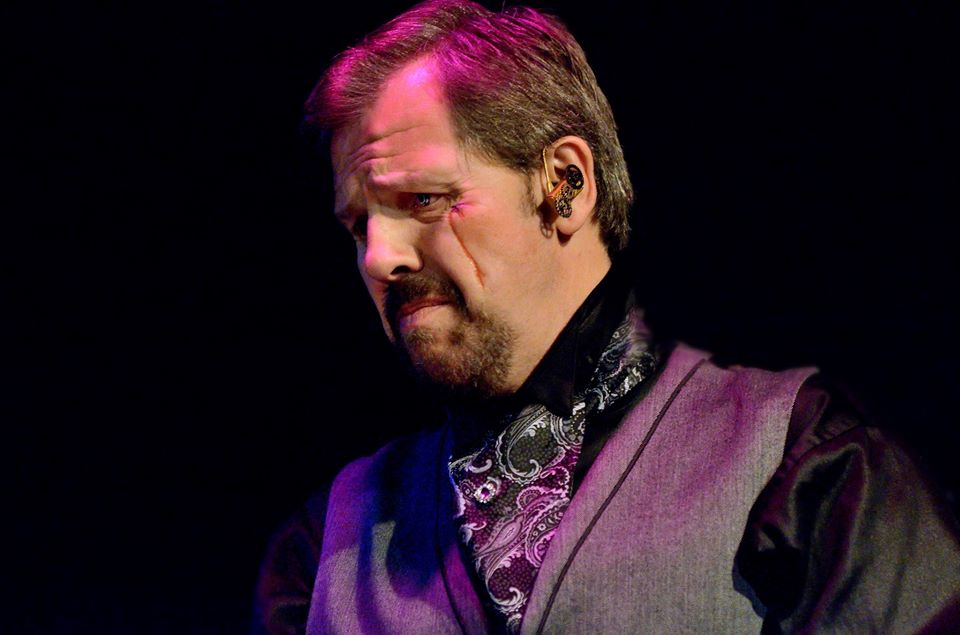 For BRASS, Phillip plays several series regulars, including the criminal Mr. Crawford and the heroic Ponder Wright, the Mechanical Detective. He admits to basing both performances on actors he admired. “I wanted Crawford to be a brash Northerner. There’s a wonderful actor named Warren Clarke, known to a lot of American audiences for Clockwork Orange, a great character actor. I actually worked with him in the flesh, and I watched him work, and that’s who I based him on. He was a big man, a thickset man, sort of square, with a lot of gravitas later in life. Someone once called him ‘a shaved monkey in a suit,’ and that’s how I picture Crawford.

“For Ponder Wright, I wanted something not as vocally human. A slightly breathy off-voice, due to his assisted breathing—even knowing I have a filter, I wanted to make this part of my work too. I also based it on Robert Downey Jr.’s Sherlock Homes—that sort of quick-thinking rushing emphasis.”

His other favorite character was his brief performance as Prince Albert in Episode 2 (and who rejoins us in Episode 30). “Prince Albert was fun! A German accent is always interesting for us Brits and to play an older version of Albert was fascinating. Not only ‘what would the man be like?’ but also ‘what would he be like in your world, who lives for Wednesday evening?’ An alive, well and randy old Albert was a hoot!”

While he enjoys the challenge of playing foreigners, he admits being the token Brit in a cast full of actors doing British accents is a bit…challenging. I ask him, candidly, if he ever finds himself wincing at the results. “With the people that you’ve got, I don’t wince that much. When Larry plays his Cockney police officer, I’ll admit I wince, but he knows that. Really, the problem with most American actors is that it’s either Downton Abbey or Cockney. That’s pretty much it, and it’s not much of a range. I won’t name names, but recently I was performing with one particular actor where I winced every time they stepped up to the mike.” Then he gives a pause and a sigh. “But the American audience seemed to like it, so what do I know? We are a polite nation.” (Ouch!) 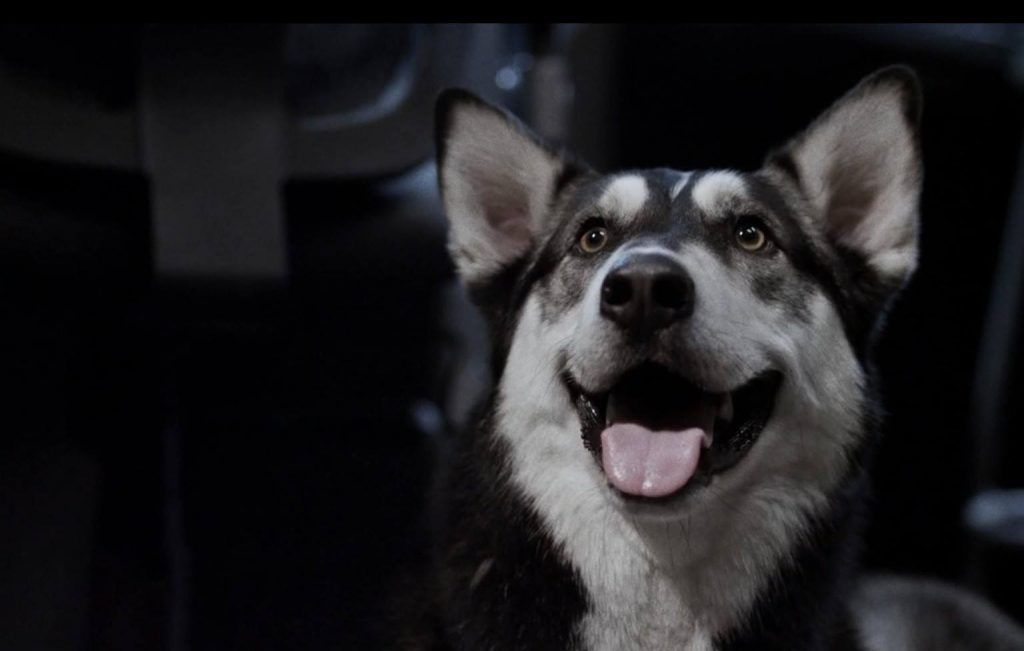 Keiman lives with an actor who was a series regular for three seasons of Z Nation, the Malamute Wizzard. A chance mention of his dog to a friend who wrangles animals for TV led to an audition and then being cast. (“There were two malamutes called, one who played a zombie dog, and one who had a regular and recurring role. Wizzard won that role because he’s better looking, I think.”) Keiman admits it was a bit galling to have had eight unsuccessful auditions for the same show while Wizzard grew an international fan base. He also notes two separate occasions when his dog had strange illnesses that led them to a trip to the vet, where both times the diagnosis was accidental ingestion of marijuana. “So yes, he’s had his issues. He’s the Robert Downey Jr. of the dog world. And yes, sometimes his ego gets kind of big, but you look into those big brown eyes and you just melt.”

Wizzard continues to occasionally work as an understudy for Dubs, the Huskies mascot at the University of Washington. “He does a nice little sideline in personal appearances, at the UW Campus, and once as the star guest for an opening of the local Pet Nation. People were lining up to take selfies with him. Can’t blame them. He’s a handsome bugger. A real good looking guy.” 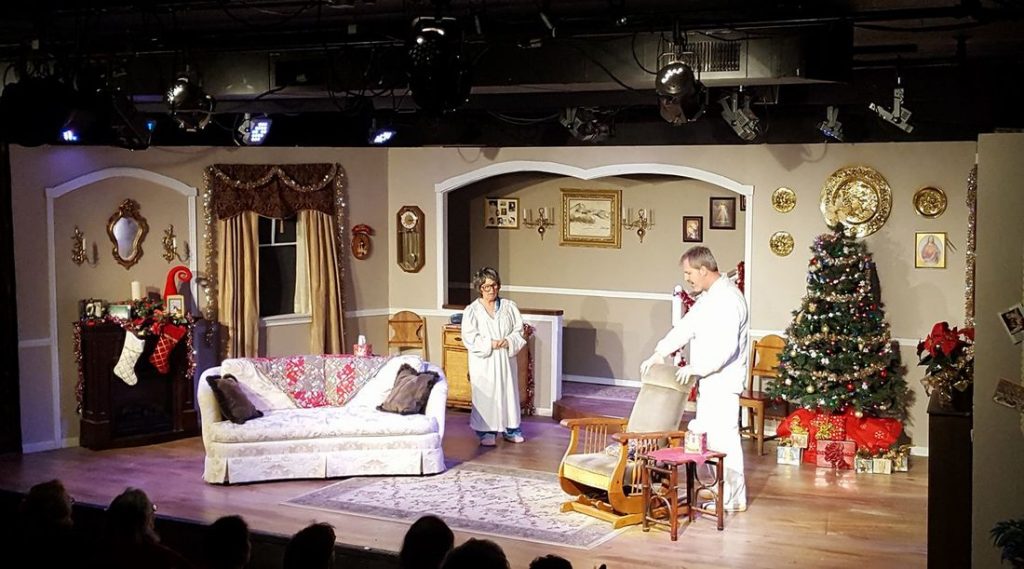 As for what’s next for his human, Keiman’s career remains busy and eclectic—an upcoming show at Burien Actors Theatre, the Christmas Spirit, where he plays a Death distracted by an invitation to Christmas dinner, and the upcoming release of a new season of The Scottish Play, a TV series currently streaming on Amazon Prime. But his next big role is one he’s been preparing for years to take on: US citizen. “I’ve got my interview coming up and I’m really looking forward to it.” I ask if he’s had second thoughts in the last few years of political upheaval both in Britain and America. “I don’t think so, no. I didn’t really look at external politics as a factor, really. America is my home. I can’t ever see myself back in England. If I’m going to live here, I want to contribute, to be a positive force, moreso now with the administration. My late father-in-law was a Scotsman, and when he got his citizenship he said his main job as a citizen was to vote out President Bush. I feel the same way. I want to vote as an American by next year if possible.”

The feeling’s understandable for an actor whose career has continued to grow in his newly-adopted home. “I’ve graduated from going to auditions to people calling me to audition, and now I’m having people say ‘I’ve written you this part, would you like to do it?’ It’s not all sweetness and light. There are companies who won’t return my emails. but I’m a jobbing actor, and I’m happy to be one here.”