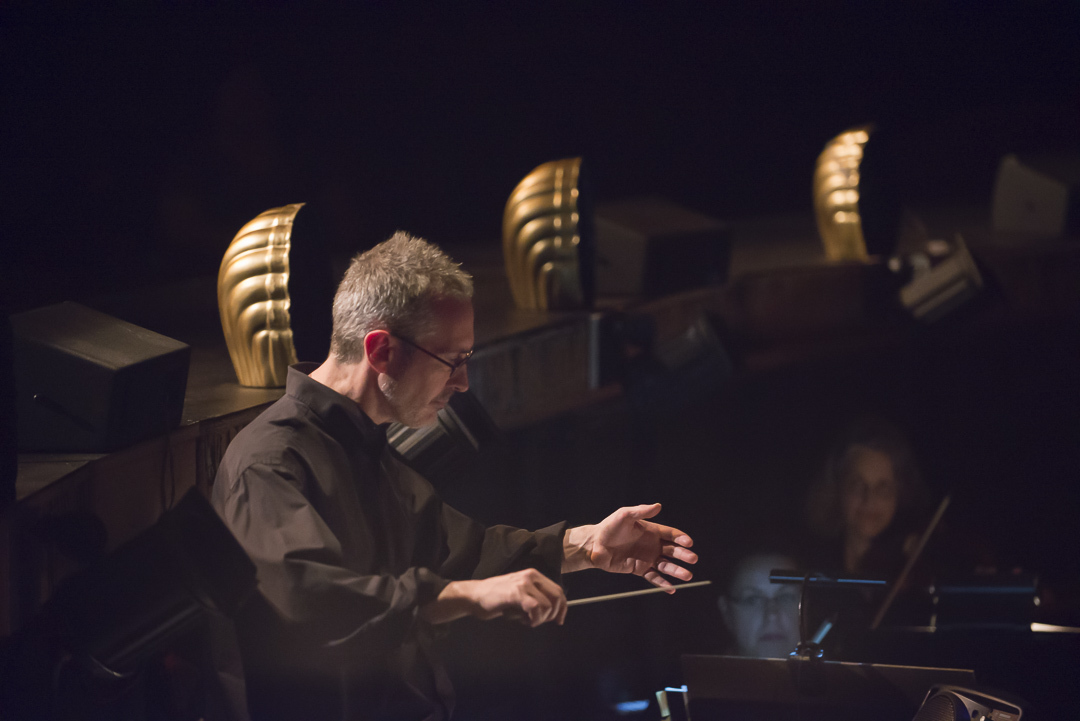 You may have noticed a new BRASS theme for Season 3. in fact, you may have noticed a lot of new music in our latest episodes, from stingers to a slightly raucous piano player in a London pub, and even a hymn played on the organ of Westminster Abbey that sounds familiar, even though you won’t find it in any hymnal.

All of this music, and much more to come, was written by our new composer, Bruce Monroe. That rarest of creatures a born-and-bred Seattleite, Monroe works as an arranger and conductor in the Seattle area, principally at the two large musical houses, The 5th Avenue and The Village Theatre. We sat down with a glass of wine (or two) recently to learn some more about the man who’s adding a new sound to our show.

BRASS Bulletin: How did you get into composing?

Bruce Monroe: When I was a kid, my parents had “Lives of the Great Composers” records, and according to the biographies on the sleeves, they all started when they were 9 or 10. So when I was 10, I thought “I should give this a shot.”

BB: Were you a prodigy?

BR: (laughing) Not at all. But I have a musical family, so I was surrounded by musicians. I loved opera, and my older brother was taking composition lessons, and he wanted to show me how to transpose all of the different instruments and write them into an instrumental score, and he did. That was my only lesson. I went right from that to writing my first work, an opera.

BB: An Opera? What was it about?

BR: Being a kid and liking dinosaur movies, I decided that this was going to be my subject. So that’s what I wrote, The Operatic Caveman. I still have the overtures and opening chorus in my basement. That’s all I finished, really. I started out with a chamber orchestra, and by the end of the overture, I had 24 more musicians join in. It was crazy.

BB: Was it ever produced?

BR: (laughing) Oh no. But I had learned so much doing it that I didn’t need to produce it. I was ready to move on. Besides, I had found out that dinosaurs and cavemen didn’t really live together in real history, which dampened my enthusiasm.

BB: Tell me about some of your history with musicals. Did you start as a composer, an arranger, or….?

BM: I started doing musicals in high school, just participating in them. But my heart was still in opera, until my freshmen year in college, when I saw a production of Stephen Sondheim’s A Little Night Music. There’s a song called “Now, Soon, Later,” which starts as solos, and then comes together into one song. That did it. By the end of hearing it for the first time, I was in. If something that amazing could be done in a musical that’s what I wanted to do.

Everything that Sondheim wrote still amazes me. The only person who for me is an equal is Lin Manuel Miranda, for totally different reasons. I listen to Hamilton constantly these days. What he’s doing, I admire so much, and it gives me hope for the future of musicals. 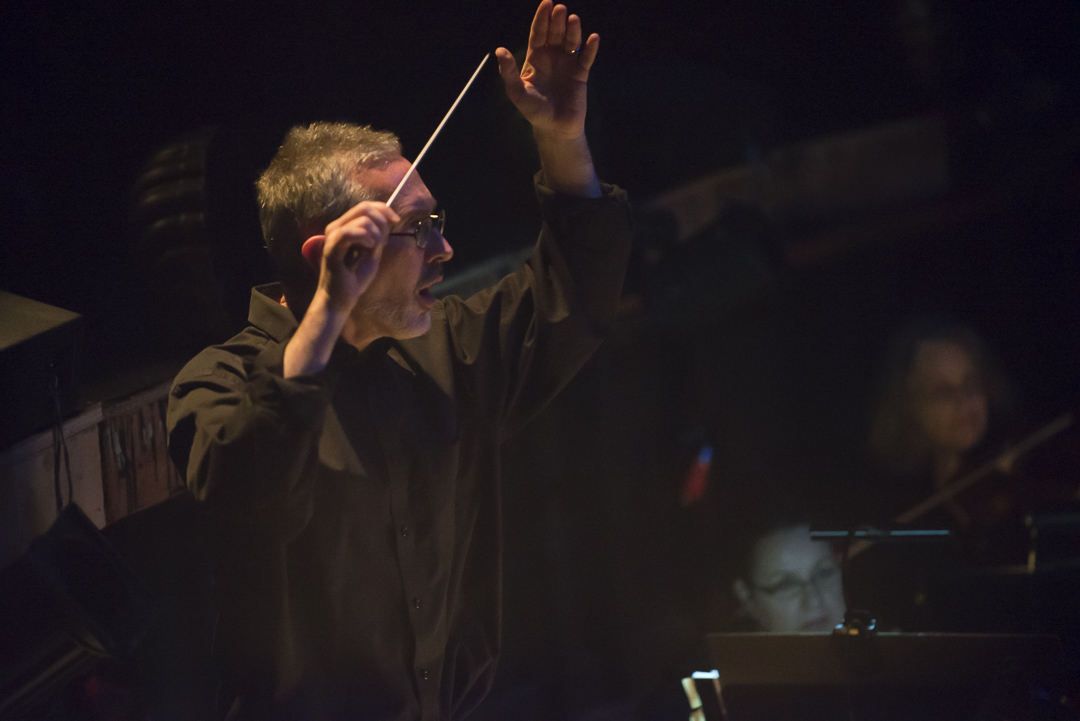 For writing themes, my original inspiration was TV shows. I watched a LOT of TV as a kid. I was so interested in the opening music to different shows that I would memorize them. There were shows where I’d only come in to listen to the opening credits, and then would leave.

BB: Do you remember any of the ones you particularly loved?

BR: Sure. Lost in Space–the episodes in color.  Twilight Zone of course, and Voyage to the Bottom of the Sea, the color episodes of that too. Lost in Space had particularly great incidental music, and I learned much later that it was all John Williams of Star Wars fame, back when he was Johnny Williams. Definitely Batman—both the theme and all the background music, that fun swinging sound. Some of their most evocative scoring was the incidental music in the episodes. Gilligan’s lsland has really, really wonderful back-up themes. And of course their musical episodes. When they did the musical version of Hamlet to the music of Carmen—that was wonderful. (At this point Bruce launches into an impromptu but word-perfect performance of the Gilligan’s Island “To be or not to be” monologue which while entertaining, defies transcription. Continuing:)

At the same time I started noticing the great orchestral scores of the films of the 1930s, particularly Robin Hood and Captain Blood, and their composer Erich Wolfgang Korngold.  Absolutely fantastic. Then there’s Bernard Herrmann’s Hitchcock Movies. When I was watching Psycho for the first time, I wondered why it was making me so tense, until I realized it was just strings. Wonderful. I was always thinking about how music works for dramatic situations.

BR: With arrangements, it depends. Anywhere from six weeks to a few months. The longer the piece, the harder it is to arrange. Ragtime, which is over three hours long, was a real beast. Usually my first question when I’m brought in to arrange is “what’s the budget?” How many musicians can you afford? That translates into what colors I am going to have on my palette. It’s the same thing when I’m composing one of my own scores. What can I get away with?

Composing? Writing a musical is such a long, drawn-out process. You’re always changing things, because you’re dissatisfied, or your director or producers are. Because it’s so big and complicated and expensive, it’s just drawn out for so long. Composing itself isn’t a problem. I find it can write the music fairly quickly in my head, and lyrics come pretty quick too. What takes time is getting the music in my head onto the piece of paper. That’s what takes the most time.

BB: What are some of the musicals you’ve created or collaborated on?

Let’s see. There was Bootlegger—based on the history of a notoriously corrupt Seattle cop on the Dry Squad in the 1920s.  That was produced at the Village. I wrote another one called Crossing Over, and the elevator pitch was a group of characters from Anything Goes end up in modern-day Seattle—or what was modern day in the 90s I guess. I’ve written a musical adaptation of Thackeray’s Vanity Fair that I really like. I’ve also got a musical version of Whatever Happened to Baby Jane? that’s had several productions. Then there’s a one-act opera called Surfer about a Superhero who’s traveling through the internet, which is basically an adaptation of the Odyssey. Instead of going to islands, he’s going to different websites; the Cyclops is a White Supremacy site, for example. He’s trying to save his website, which is called Ithaca. Anyhow, it’s crazy but fun.

BB: What was the challenge, for you, of composing for a 19th century-ish project like BRASS?

BM: Benjamin Britten is one of my opera writing heroes, one of the only English composers who knew the operatic stage. I certainly drew on him. But my real advantage was that as a child my Mom played in the pit for the local Gilbert & Sullivan society. What’s more, I arranged The Pirates of Penzance for the 5th Avenue a few seasons ago. So really, there was no problem at all.  That’s what has been interesting. I’ve never written in this genre before, but it feels right and natural for me.

BB: How does arranging a composer’s music, like Sullivan’s, help you learn how to create music in that genre?

BM: Every composer has certain, not tricks, but favorite musicals motifs, certain chord progressions. You learn to recognize them. It’s like a winemaker’s signature. If you drink a lot of wine, you can start to feel that you can understand the signature of each wine. Whether it’s Chardonnay, Pinot Noir, or Syrah, it always tastes the same way. That’s why Wagner sounds the same way, because there are just certain things that he loves. You have to know what these are.  (BB: As mentioned earlier, this interview was over wine. At this point, some more wine was partaken in, and some of the statements below from either party may have been slightly under the influence.)

It can even be for music you don’t particularly like. I worked on a production of Oliver, and I really don’t like that music. But arranging it enabled me to be fluent with it. Because I was willing to have less respect for it. I should say that Oliver is notorious for its terrible orchestration. If you can do anything better, you get credit from other arrangers.

BM: Two full-length films and one short. The first movie was Gory Gory Halleluiah, a satire of zombie movies. It was really fun to study all of the musical tricks that you have in those sorts of movies. I should also add that it was also a musical, but we treated the musical like a completely separate score, as if two different people were composing—one writing the musical songs, the other the soundtrack for the horror film.

A lot of horror movie scores were inspired by classical music, and a lot of the composers classically trained, so that was a way in for me. The other was called Switchmas. That one was a sort of family film, so I used family film vocabulary. But it’s also a musical that has songs in it, like the zombie film. I this case though, I used themes from the songs from the musical for background music and different variations.

BB: How does audio drama differ from other mediums you’ve composed for?

BM: Because there’s no visual, music takes more a back seat than it does for TV or a movie. There’s less of it. You have to be careful that the themes are not too elaborate. You have to be aware that the most important thing is the spoken word. It’s the exact opposite of opera. There’s less scope for the music to take charge.

BB: You recently premiered your second opera, which you’ve told me was on your bucket list. Anything else on that list?

BR: Write a ballet. And do a radio drama. Yes, believe it or not, this was on my bucket list! And I’ve always liked Steampunk. The League of Extraordinary Gentlemen was where I first discovered it, and both the literary aspects and the fashion and style really appealed. Then when I heard about BRASS, I thought ‘I like this.’ And I wanted to be involved in some way.

BB: What’s up next for you?

BM: Another Opera’s coming definitely. There are a couple of musical that I want to give a shot, including a musical adaptation of Vanity Fair that I’d like to rework. I’m not done with that yet. I’ll be conducting Threepenny Opera up in Shoreline College. And I’m really proud of this, one of my musicals, “Baseball Saved Us”, book by Ken Mochizuki (based on his award winning short story) with music and lyrics by Me, will be touring Washington State Schools this year for the third time. It tells the story of Japanese internment through the eyes of a baseball loving boy named Shiro and his family.

(And with that, dear reader, our companions for the evening arrived, and so did our appetizers. Thanks again to Bruce Monroe for the chat.)