It’s an open question as to who are the best actors in Seattle, but the general consensus of the acting community itself is that Charles Leggett deserves a place in the pantheon–as well as maybe a drink or two of something very nice and Irish. He’s received the region’s Gregory Award, the Seattle equivalent of a Tony, and has been twice been nominated since. (You can watch a short interview with him about the award here.)

Leggett combines a poet’s soul, the body of a banker, and an incredibly mutable visage which somehow allows him to act in just about anything, from farce to tragedy. He’s played, to acclaim, Shylock, Prospero, Lenny in Of Mice and Men, Falstaff, and Mycroft Holmes, Sherlock’s smarter brother, along with many other roles on practically every major stage in Seattle (including the Seattle Repertory Theatre, ACT, Intiman, Seattle Children’s Theatre, and Seattle Shakespeare). He’s acted on film with Edie Falco in Lynn Shelton’s Outside In, is a published poet, a damn fine blues harmonica player, and now assumes the role of Lord Brass in our series.

BRASS Bulletin: What got you into acting?

Charles Leggett: Say what you want about Iowa, but in the mid 1970’s, the public education system there was very good. I may have scribbled “fireman” or “policeman” on a few school questionnaires regarding my future like everyone else, but on some of them I wrote “actor.” I knew that telling stories was, as they call it now, “the bomb.” They had a big bulky video camera in the classroom in Larabie, Iowa, in my sixth grade year; we wrote scripts and filmed them. I was a goner.

BB: You’ve done a series of audio books, and as I recall also some audio drama work with Sandbox Radio Theater. Have you done other audio work?

CL: Several gratuitously violent video games, and a handful of radio ads. And I’ve blown harp on a few tracks here and there on albums for some local bands, and contributed harp on some sound designs for theatres, as well as writing, performing and co-arranging tunes for Sandbox [Radio Theatre, a live audio drama smorgasboard much beloved in Seattle].

BB: What are the similarities and differences to your process in doing audio drama vs. stage or film work?

CL: It’s a matter of where the antennae are best pointed in the service of telling the story. The first duty, in all these mediums, is of course to know the story you’re telling and how to tell your part of it. Experientially, it’s a matter of the genus and level of concentration, and what that feels like to maintain. Audiobooks are a matter of preparation, stamina, and managing the sounds of one’s mouth and body (as well as voice). (Sometimes I need a pillow over my belly just before and after lunch.)

For stage, all the antennae are usually pointed outward, toward one’s colleagues and the audience—and you have much more time to rehearse. The experience encompasses a whole (sometimes very large) room and everyone in it, rather than printed pages and a set of earphones—and, more than other mediums, places a high premium on listening. The Sandbox adventures were a sort of mixture of the above: you’re in the room with everyone, audience, voice actors and Foley, but must stay focused on the page. I mostly didn’t even bother with glancing beside me to “connect” with my colleagues: what “acting” I did was straight out at/for the audience, my focus on the pages. You have to be sharp with text in that setting and keep it moving along.

Film, I’ve not done enough of to really speak of it. I get hired around here if I’m exactly right for something, assuming I have the time to do it. Much has been said about stage vs TV/film acting; I’ve nothing to add. 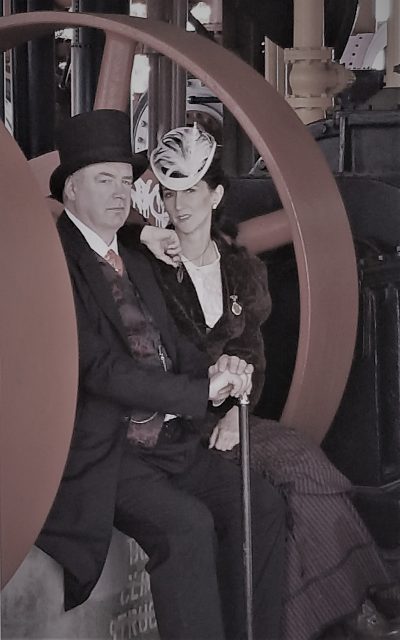 BB: As an actor you have a talent for gravitas–the stern professional, capable and serious. Yet you often seem interested in undermining this very quality in your performances–allowing us to see past the character’s appearance to unexpected emotional depths, or a surprising silliness. Is this “theatrical license,” a technique to make the character more interesting, or do you believe that even the most seemingly important and grave person wears a facade?

CL: It’s not necessarily that they wear a facade: it’s simply what life does. One of the gross ravages of living is the silliness it exposes our behaviors to. No life escapes it. At some point, one of Mahatma Ghandhi’s farts precisely matched the tone of a passing train’s whistle. Shit happens to characters in plays—that’s why they’re written. I’m interested in making the shit that happens to the characters I play as authentic as possible in a/the way that best serves the story being told. With the exception of this fervent search for authenticity, my “gravitas” is as a chance occurrence, like which shirt I put on this morning and now couldn’t tell you what it looks like without stealing a glance. It’s not me at all, really; outside of my lovingly ravaged body, I’m still a kid: nerdish, nervous around attractive women, idealistic, that sort of thing. I look in the mirror, meaningfully furrow my brow, and think, who tf is that?!?

BB: In conversation, you recently told me that because of shifts in theater and the larger culture, you’re finding yourself playing some interesting roles these days because of your race, gender and age. Do you believe there’s a need in this larger culture to dissect the older white male in ways that take away his power and prestige? If so, why? If not, what do you think is going on instead?

CL: At the very, very least, to examine him—inasmuch as he even fits into the stories that are now at long last starting to find their way onto our stages. Yes, such examination does necessarily take the form of indictment—read the headlines and ask yourself, how could it not? And then remember that today’s headlines are merely the tip of our history’s iceberg.

I am currently working on Eisa Davis’s play Bulrusher. I am a schoolteacher who has been courting the Madame of a successful brothel for at least three decades, and who, when my rival for Madame’s love, a Black man, brought into the brothel an abandoned infant child he found floating in a basket and caught in the weeds (bulrushes) of the Navarro River (in Mendocino County, No. CA) 18 years ago, I immediately chose to take her in and raise her. She is also colored, and happens to be clairvoyant; she and my rival are the only Black people in the town—which is in a very isolated valley. You have many layers of racial and sexual politics plus all manner of family dynamics exploding in everyone’s face, in a community that late in the 19th Century invented its own language! (The town is Boonville, the ling harped is called Boontling.) Definitely a play for the 21st Century—it was a finalist for the 2007 Pulitzer Prize.

Much more of an indictment was Arnold in Taylor Mac’s Hir, a co-production early last year, Intiman at ArtsWest. A former plumber who regularly cheated on his wife and verbally and physically abused her and their two kids—until a disabling stroke. Ever since which, said wife, his “caretaker” in name only, has been systematically exacting her revenge through a relentless program of humiliation and emasculation.

And yet artistic endeavor is Venusian in nature, not Martian: it brings us together, rather than separating us; holistically, it has more to do with love than war. Some folks seeing Cheryl Strayed’s Tiny Beautiful Things at Seattle Rep just this past May/June may have been uncomfortable hearing stories about a transgendered person or abortion, but after one of our previews, a colleague who’d seen it rushed back to our dressing rooms, eyes red with tears, and remarked upon how, in the face of the harrowing look at pure, irreconcilable grief that comes late in that play, all such culture war differences between the viewers simply dissolved. The production broke both the gross revenue and ticket sales records for the Rep’s Leo K. space.

CL: Eisa Davis’s beautiful play Bulrusher, produced by Intiman at the Jones Playhouse in the U. District, opens 8/22 and runs through 9/14. A few weeks off; officiate a friend’s wedding on Guemes Island (the weekend of my 54th birthday); then neither singing nor dancing my way through Guys and Dolls at the Village, which takes me all the way into February.