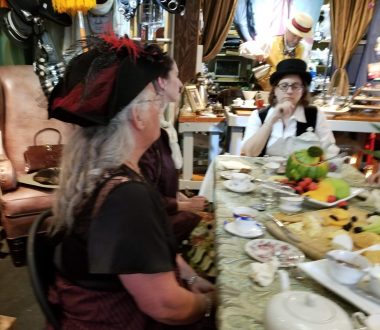 Recently the Brass family, as represented by Lady Madelyn and Gwendolyn, sat down for Decedent Tea (that is, tea at 6:00 PM, as the fashionable are calling it) with the Sir and Lady Knightsbridge Family at B.F. Fuller’s Mortar and Pestle Tea Shop in Fremont.

The evening, the fulfillment of a long-anticipated social encounter between these two storied lineages, included social discourse, a vast panoply of delicious comestibles, and of course lovely varieties of tea, including Victorian Breakfast, Hibiscus and Oolong. 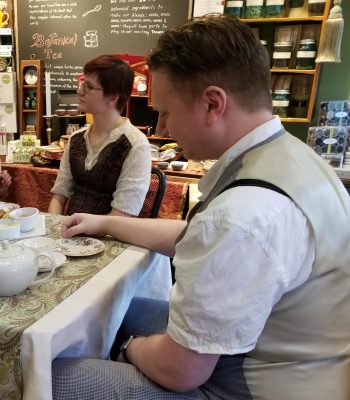 Various parlor games were considered before the company settled on a new card game, “Elevenses,” which appropriately enough had as its goal the creation of the most enticing tea service.

Entertainment was provided by both the proprietor of the establishment, Mr. William Sullivan, and his rather unruly help Joshua, whose occasional  outbursts regarding class and the oppression of the proletariat were only mitigated by his outstanding hand in the creation of cucumber, salmon and egg salad sandwiches as well as scones with homemade jam and lemon curd. 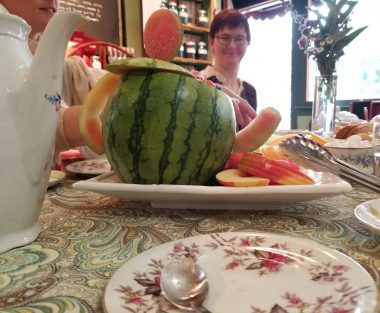 Credit must also go to Joshua for his formidable fruit-carving skills.

Near evening’s end a mysterious stranger identifying herself as Sandvik wandered in from the street and took a seat at the table, from where she held the company like Coleridge’s Ancient Mariner on strange topics including Alaska, Norwegian Forest Cats and seances, before drifting again out the door, leaving some doubt as to her corporeal nature.

This strange visitation led to a veritable riot of fashionable excess, culminating in the Knightsbridge’s guest Miss Jennifer donning a red fez which she refused to remove. Thankfully calmer heads prevailed, and before cucumber sandwiches and hot tea could go flying, the guests made their farewells and headed homewards.

Our thanks to Will and the fine folks at B.F. Fuller’s–and keep an eye out for future events of a similar nature!